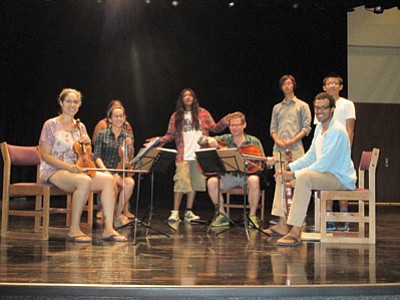 The Hopi High young composers pose with the Catalyst Quartet after playing their pieces. The students standing in back from left are Myle Dennis, Alex Allison, Daniel Lim and Nicolai Bolus. Photo/Stan Bindell

POLACCA, Ariz. - Hopi High School music students continue to benefit from a unique musical experience thanks to the Native American Composers Apprenticeship Program (NACAP), which is part of the Grand Canyon Music Festival.

The program started with NACAP composer Raven Chacon teaching the music students how to compose and ended up at the Grand Canyon where string quartets ETHEL and the Catalyst Quartet performed the student composers' pieces.

Before Chacon arrived, Robertson gave these students preview lessons on how to write for a quartet.

"The students learned the terminology for composing," Robertson said.

Allison wrote a piece called "Gourd of Ashes." It took him a few days to write the musical composition, but that was after getting direction from Robertson and Chacon. He also credits former Hopi High music teacher Thomas Irwin with teaching him how to read music.

Allison said the experience was incredible, but he felt that Catalyst could have improved his musical composition with different notations.

Allison, a sophomore, has been in the music program for four years. This is his first time with NACAP. He plays tenor sax.

The youngster thought the venue at the Grand Canyon Music Festival could have been improved.

"I thought it was going to be in the amphitheater, but it was in a little community building. My family still liked it," he said.

Allison said the experience motivates him to keep his music going and he plans to be involved with NACAP the next two years. He's hoping to earn a music scholarship to college.

Four other northern Arizona schools were involved in NACAP this year. NACAP has been going for 30 years and Hopi High has been participating for more than 10 years.

"When I first got here, this was the first thing that (Hopi High Principal) Glenn Gilman told me about," he said.

Robertson said the student composers and the audience enjoyed hearing their pieces.

"The students felt like they had written masterpieces," he said. "Their families were in the audience. The performances went smoothly."

Robertson is thankful that all of the student composers at Hopi High are underclassmen so he looks forward to them all returning next year.

"This year I hope to teach them a computerized notation program for composing," he said.

"She is extremely organized, efficient and inspiring," he said.