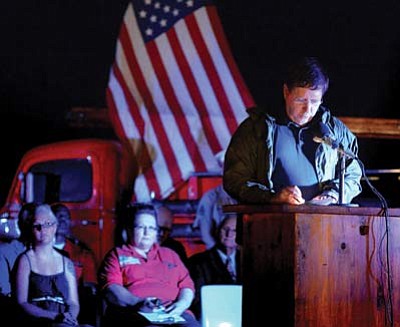 For the second year, Winslow's 9-11 Memorial Service honoring the victims and surviving families of the terrorist attacks against the U.S. took place at the newly redesigned East End 9-11 Park. The park redesign is a long-term joint project completed by the Winslow Rotary Club and the Winslow City Parks Department.

Greg Hackler and Paul Ferris headed up the park project for Rotary. Retired City Manager Jim Ferguson, City Planner Paul Ferris and Winslow City Parks Supervisor Scott Lancaster worked on the project for the city. The 9-11 East End Park is nearing the completion of Phase 1, which will incorporate up-lighting for the columns. There will be a number of additional phases moving the park toward completion.

Eventually East End 9-11 Park will extend for about a quarter mile in length with substantial parking, planting and amenities for local and traveling visitors.

This year's service began promptly at 7 p.m. and lasted 30 minutes. It was a sober and melodious presentation with the Winslow High School Choir, Kelsi White and Darren Fowler providing music and singing.

Other participants included the Winslow Fire Department who helped before, during and after the service and the Winslow Police Department. Some of the guests of honor were County Supervisor Jesse Thompson and Rotary District 5510 representatives Jay Jones, Carol Jones and John Pennypacker.

Cellular One sponsored the event and provided lighting and sound.