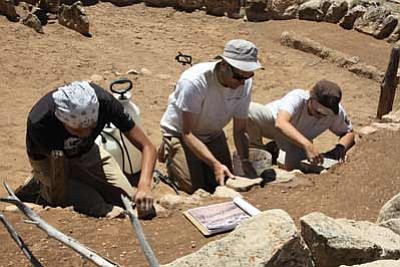 Park Service Archaeologist Jason Nez talked with the Navajo-Hopi Observer about prescribed burning, site excavation and how important it is to preserve area resources.

How long have you had this job?

How many people are on your staff?

The cultural resource staff currently has a staff of four permanent archaeologists and two seasonals. We also have three interns working with us right now. In addition to archaeology work we also have a dedicated fire archaeologist. He coordinates activities around culturally sensitive sites. So if there's a fire in the Canyon and there's a prehistoric or historic structure involved he'd be the first one to be notified and get out there. In addition to him, my co-worker and I go out to fires whenever we can. We're always ready to go out on assignment inside and outside of the park.

So what do you do when you go out to fires?

It depends. A lot of times it's monitoring dozer lines. Out of the park they'll use dozers to dig fire lines. We'll get there and work with them to dig fire lines around the ruins, dig gutters. And there is a lot of post-fire work, like checking on rocket panels to see how the ruins were affected by the fire.

Do you go down into the Grand Canyon for your job?

Yeah, in addition to fire work, we also have a regular job, which is a lot of in-park site monitoring, site recording, survey work whenever we can. For example, if the park wants to do some road improvement we'll have to go down and research it to see what's there. If it hasn't been surveyed before we'll have to go out on the ground and see what's there before they bring any equipment in or do any ground surveys.

What do you regularly find in this area?

One of the more common things we see throughout the park is evidence of prehistoric people. We have found roasters, whatever people were cooking. We have small pueblos, walk up panels and a lot of historic stuff like campsites. Some of them are associated with the early history of this park, like the remains of the old Grandview Hotel, things like that.

Let's talk about some of the projects you're working on now.

We have a bunch of projects going on right now. Two of our interns are out at the North Rim doing some stabilization work at Walhalla. They are checking what kind of damage has occurred since last year. They do that every year at the Tusayan Ruin and Walhalla. It's visited pretty heavily. That's one of our yearly projects. We're also doing a survey on the South Rim for future road improvements. No one really knows what's out there. Then we'll be working on the North Rim with the Grand Canyon Field Institute. We'll be surveying, recording sites, doing some monitoring. There's a lot of new work to be done on sites that haven't been surveyed before.

What kind of challenges do you deal with as an archaeologist at the Grand Canyon? Is it the amount of visitor traffic?

It's not necessarily the visitors, they aren't coming here looking for prehistoric sites. But a lot of our work is out in the back country. We're constantly going. Someone's gone all the time. We have to hike to secluded areas a lot, then survey them and hike back to our vehicles and stay at campsites that are like, 10 miles away. It's pretty physically demanding.

On the other hand, what would you say would be the highlight of your tenure here at the Canyon?

Within the park? I don't know, I consider all my work a highlight, as cheesy as that sounds. As a Native American, I'm trying to protect our resources, or what's left of them. I feel good about being on a team and protecting these resources and preserving them.

You mention protecting resources, from what specifically?

There's a lot of mining going on around the Canyon, and people are always proposing land developments and projects that would impact the Canyon in one way or another. Whether it's water, or affecting the viewscape or dust coming up over the Canyon.

On that note, do you work with other archaeologists outside of the park?