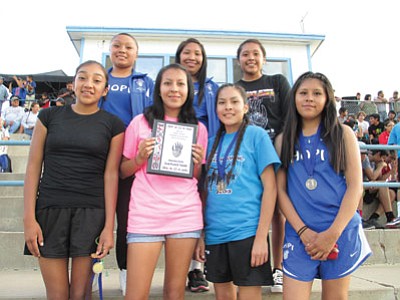 Hopi placed second in the girls race and third in the boys race out of 16 teams.

Page won the girls race with 60 points. The Lady Bruins were right behind with 67 points and Monument Valley grabbed third with 72 points. Ganado finished fourth with 72 points.

Nikesha Eagleman, a sophomore, was the individual state champion with a time of 20:46 in the 78-runner race.

Eagleman was excited about taking first because she placed second last year.

"I pushed myself more this year, but they changed the course. There were more hills and I liked that," she said. "It was hotter this year. I could feel the heat on the bottom of my sneakers. That slowed me down a little bit."

"We need to increase our pack time," she said.

Eagleman said her season goal is to decrease her time to less than 18 minutes and to place first or second at state. She expects Ganado to place second or third at state.

Eagleman also plays basketball and runs track. Despite giving a lot of attention to sports, Eagleman is an honor roll student. She has been running since the third grade. Both of her parents were runners. Her mother Terri Kelewood Eagleman was a state champion runner at Ganado. Her father Jerrell Eagleman ran in South Dakota.

Mariah Yazzie led Page with a fourth place finish and teammate Lara Yazzie was right behind her in fifth. The other runners for the championship team were Jordan Roskelly, tenth; Tomeka Church, 20th and Aniya Nez, 23rd.

Ben was pleased with her performance.

"I ran pretty good for the first meet of the season," she said.

Ben expects the Hopi girls to repeat as state champions this year. She hopes to finish in the top five at state, but she feels she could finish as the state champion.

In the boys race, Page won with 28 points, Tuba City grabbed second with 50 points and Hopi took third with 102 points.

Hopi High Coach Rick Baker said the Bruins ran well and had the best score of any team from Division IV. Page and Tuba City are in Division III, which has much larger student populations.

"We're not quite in shape, but that will come," he said. "At these invites, you try to beat everybody you can."

Baker said he was frustrated because not all of his runners ran during the summer.

"Skylen was number seven last year, but he was our number two man today," he said. "Anfernee always runs well, now the others need to step up."

Hopi High was missing one runner because of grades, but the other runners were healthy.

Baker said the toughest opponents at state will be Northland Prep and Pusch Ridge.

Anthony Masayesva from Tuba City High School was the individual champ with a time of 16:38. The top six runners were from Page or Tuba City in the 83-runner race.