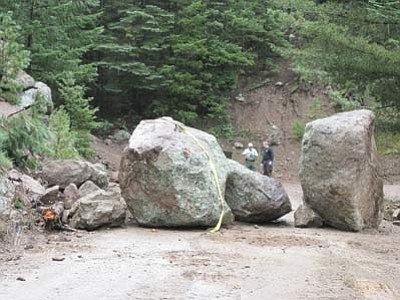 A boulder sits on Elden Lookout Road after it crushed a man Sept. 10. Submitted photo

A large boulder weighing more than 30 tons crushed and trapped a 27 year-old man from Phoenix standing on Elden Lookout Road. The man was attempting to move another large boulder that had previously fallen into the road when the boulder slid down the mountain side.

The Arizona Department of Public Safety Air Rescue Helicopter was placed on a standby status pending the arrival of emergency personnel who would assess the conditions and determine if a safe landing zone was available.

A Sheriff's Office patrol sergeant and corporal arrived at the accident first and saw two very large boulders blocking the road. Four men traveling with the victim removed him from underneath the boulder. The boulder appeared to have crushed the victim's legs and pelvic area. Because of the condition of the road, an ambulance and fire truck could not get to the victim. First responders were able to drive additional rescuers to the scene in four wheel drive vehicles.

A helicopter could not find a safe spot to land. Recuers put the victim in an SUV and drove him to an ambulance that took him to Flagstaff Medical Center.

The victim and his companions were headed up the mountain to work on one of the radio towers.

The Coconino National Forest closed Elden Lookout Road and may temporarily close other trails and areas affected by recent rains.