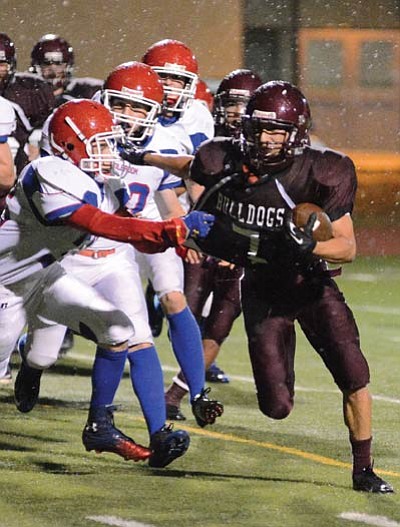 Henry Montiel runs past a Holbrook defender on the way to a Winslow 47-0 home game opener win Aug. 30. Photo/Todd Roth

The Winslow Bulldogs opened their 2013 football season at home Aug. 30 with a 47-0 victory over the Holbrook Roadrunners. The game was close in the first quarter but the Bulldogs took control in the second quarter and continued to control the game in the rain.

The first quarter was played on even terms until the Bulldogs scored with less than two minutes to go in the period. Kelly Wood scored on a brilliant 46-yard run to complete a 95-yard drive. The other big play in the drive was a 36-yard pass from James Martinez to Demetrius Gamez. Holbrook blocked the conversion and Winslow took a 6-0 lead into the second period.

James Martinez scored on a nine yard run the next time the Bulldogs had the ball. The Bulldogs converted on fourth and long the play before the touchdown run. Wood ran for the two-point conversion that increased the Winslow lead to 14-0 with just more than seven minutes left in the half.

Next, the Bulldogs drove 64 yards and scored on a one yard run from Martinez. Rodney Davis booted the conversion to give Winslow a 21-0 lead with just more than a minute left in the half. The Bulldogs scored again before the half ended when Tres Cake recovered a Roadrunner fumble in the end zone to increase the lead to 28-0.

Wood returned the second half kickoff 80 yards for a touchdown to make a 34-0 Winslow lead after a failed conversion kick. Wood ran 48 yards to score the next time the Bulldogs had the ball to give Winslow a 40-0 lead after Holbrook blocked the conversion kick. More than seven minutes remained in the third quarter.

C. J. Chacon scored in the final minute of the third quarter on a one-yard run. The conversion kick by Davis gave Winslow a commanding 47-0 lead and assured that the fourth quarter would start with a running clock.

Holbrook lost the ball on a fumble in their first possession of the fourth quarter but Winslow missed a long field goal on first down. With the clock running, the final period passed quickly with Winslow only attempting long field goals and their only punt of the night.

The two freshmen on the varsity roster are quarterback and defensive back Jalen Hayes and offensive and defensive lineman Sonny Begody.

Winslow enjoyed superb efforts from Kelly Wood, James Martinez, Henry Montiel, C. J. Chacon, Demetrius Gamez, Jace Hardy and the entire defense. The lead was sufficient to earn considerable playing time for the bench in the second half. Winslow did not have to punt until the closing minutes of the game.