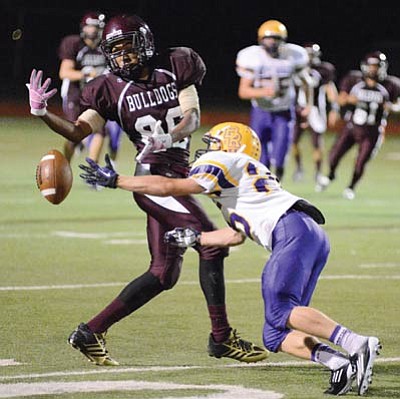 Winslow’s Demetrius Gamez can’t hold on to a pass during the Bulldogs’ 21-6 loss to Blue Ridge Sept. 6 at home. Photo/Todd Roth

The Blue Ridge Yellowjackets defeated the Winslow Bulldogs 21-6 in a hard fought football game played in Winslow Sept. 6. The win evened Blue Ridge's record at 1-1 and dropped Winslow's to 1-1 for the season.

Blue Ridge scored on its first play from scrimmage when senior running back Chris Johnson dashed 52 yards for the touchdown. Tedd Seipp booted the conversion for a 7-0 with 10:19 left in the first quarter. Blue Ridge kept the advantage in most of the first period and led 7-0 when the quarter ended.

Blue Ridge's Chris Johnson's running was the biggest factor in the outcome of a closely played game between two very good teams.

Winslow's James Martinez passed 37 yards to Demetrius Gamez for a touchdown only to have an ineligible receiver down field erase the score. Nolan Cook recovered a fumble for Blue Ridge to end that scoring threat.

Johnson, who paced Blue Ridge on offense, scored his second touchdown of the game on a 48 yard run with 4:09 left in the half. The conversion gave the Yellowjackets a 14-0 advantage.

Martinez then connected with Gamez from 32 yards out for a Winslow touchdown with just 1:44 left in the half. The conversion failed and Blue Ridge took a 14-6 lead into the locker rooms.

The third quarter was scoreless, although a pass interception by Brennan Schimmel gave the Yellowjackets the ball at mid-field near the end of the period.

Johnson scored his third touchdown of the game on a five yard run with 10:26 left in the contest. He intercepted a Winslow pass later in the contest to halt a Winslow drive. The conversion after Johnson's score put the 21-6 final score on the board.

The Bulldogs will journey to Eagar on Friday to meet the Round Valley Elks in another important game with playoff implications. Round Valley pounded Pinon 80-0 in their opener at Pinon on Aug. 30 and played host to the Williams Vikings on Friday.