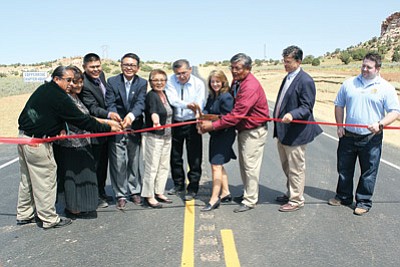 U.S. 89T, known locally as the Coppermine Road, runs parallel to US 89 from The Gap to LeChee and is accessible on U.S. 89, approximately 17 miles north of the US 160 junction (Tuba City exit).

Even though paving operations are complete, U.S. 89T remains an active construction zone. Crews continue to install right-of-way fencing along the road because of the large amount of livestock in the area. Until the fencing project is done, the road will be open only during daylight hours (except for local residents) and a 25 mph speed limit will be in place. Once the fencing project is complete, ADOT will lift the speed limit and the nighttime driving restrictions.

The construction project budget grew from $18 million to a $40 million effort in an unprecedented collaboration between ADOT, Navajo Department of Transportation (NDOT), the Bureau of Indian Affairs and the Federal Highway Administration. The road took 79 days to Pave. FNF Construction finished the paving 11 days early, with assistance from AZTEC Engineering and RUMCO.

"This was a game-changing collaboration," said Paul Chaco, director of NDOT. "Not only did ADOT get this paving done in such a short timeframe, but we all came together to expedite the project."

The official dedication for the road took place Aug. 29 at the junction of Coppermine Chapter Road and N20.

Floyd Stevens, president of Coppermine Chapter, said ADOT crews will continue working on finishing touches for the roadway through September.

"We're very excited about the opening. The word is already out," Stevens said.

ADOT urges motorists to slow down, pay attention to surroundings and be aware that the roadway is prone to animal crossings.

The new detour along N20 is almost the same distance as the original route to Page on U.S. 89, but with a lower speed limit along U.S. 89T, the original detour route may be the faster option for now.

U.S. 89T is not part of the ultimate solution to repair U.S. 89. ADOT's proposed solution is to move the travel lanes away from the active landslide and construct a gravity buttress to stabilize the area. The $40 million repair is expected to take more than two years to complete, and will include significant environmental right-of-way clearances prior to construction.

More information about progress on U.S. 89 is available at www.azdot.gov/US89.