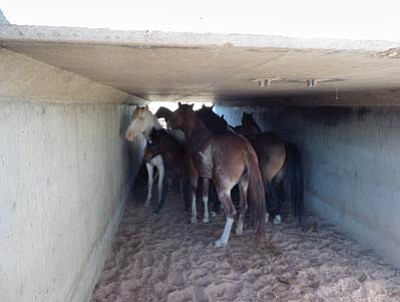 Elders, medicine men and traditional people who had been calling for Shelly to stop the roundup, sale and slaughter of horses because of the importance of horses to the Diné culture, spirituality and society welcomed the announcement.

According to Leland Grass of the Nohooka' Diné, "horses are not only a symbol of the Diné people, The Great Horse Nation is a part of the Great Covenant, as a supernatural being, it possesses incredible power, it is inextricably tied to our spiritual way of life and our cultural traditions."

The Navajo Nation Department of Agriculture (NNDA) initiated the feral horse round up after Shelly signed legislation in July.

The department decided the action was necessary after many tribal ranch meetings, grazing meetings, the annual agriculture conference and local presentations. Representatives in these meetings expressed concern that continuous drought conditions, extreme temperatures and high winds combined to cause forage degradation, erosion and loss of topsoil.

Erny Zah, director of communications for the president's office, said the horse round ups were the result of land management issues that came directly from the local communities to the administration or to the NNDA. He made a distinction that a feral horse is not a wild horse but an abandoned horse that is not able to be self-sufficient in the wild and, therefore, hurts local ranchers' and farmers' livelihoods.

Feral horses competing with domesticated horses for food, water and natural foliage on the reservation led local communities to ask for help with rounding up the horses, he said.

Shelly said the Navajo Nation is using a variety of methods to manage the horse population.

"This approach to manage our resources has included the use of horse roundups and other humane methods with our goal being strengthening our balance between livestock and the land," he said.

While these same elders and traditional leaders approved of the announcement between Shelly and Richardson, many were concerned that it took outside intervention to get Shelly to reverse course.

On Sept. 28, the Diné Hataali Association passed a resolution to halt completely the horse roundups.

The Nohooka' Diné people resolution was established to stop the NNDA from any more roundups.

In their resolution they cite the "cruel" way Shelly's administration has handled the horse roundups.

Grass said some chapter houses, after hearing about how the roundups have been handled, have passed resolutions using the Nohooka' resolution to stop the roundups because of reports that domesticated horses are being caught up in the roundups. One report said that during the roundup, many horses were bleeding from running into fences and that the NNDA crews used motorized vehicles to run down the horses to exhaustion. They also said that some mares had been hauled off without their foals.

Zah acknowledged that wild horses, domesticated horses and feral horses are all sometimes caught during the roundups.

According to Grass, the elders and medicine people also expressed concern that this attempt at livestock reduction would soon extend to cattle, sheep and other livestock. The traditional leaders from Nohooká Dine', the DinéHataalii Association and the Elders and Medicine People of the Diné want to be included as a party to discussions in how the livestock reduction issue, in its entirety, should be addressed going forward.

"I am interested in long-term humane solutions to manage our horse populations," Shelly said. "I have always advocated for strong long-term solutions and partnerships. Our land is precious to the Navajo people as are all the horses on the Navajo Nation. Horses are sacred animals to us."

Richardson represents the Foundation to Protect New Mexico Wildlife, which he founded with actor, director and conservationist Robert Redford. The foundation is working to stop the slaughter of horses, including actively fighting efforts to reopen horse slaughterhouses in the United States. The foundation is committed to finding humane alternatives to horse slaughter to deal with the nation's wild horse population and is working with advocacy groups such as Return to Freedom, headed by world-renowned horse advocate Neda DeMayo.

"We have met with Governor Richardson and we have come to an agreement to find long term solutions to manage our feral horse issue on the Navajo Nation," Shelly said. "We will suspend horse round ups and forfeit support for horse slaughtering and horse slaughtering facilities."

The two leaders agreed to develop a Memorandum of Understanding that would suspend horse roundups on the Navajo Nation while the Foundation to Protect New Mexico Wildlife and other horse advocacy groups, including Animal Protection of New Mexico, work with the Navajo Nation to develop and implement alternative policies to manage feral horse populations. Possible solutions that will be explored include equine birth control, adoption, land management and public education.

"I commend President Shelly for calling for an immediate end to horse roundups and for making it clear that moving forward the Navajo Nation will not support horse slaughter or the return of horse slaughter facilities," Richardson said. "This is exactly the outcome horse advocates, such as myself, had hoped for."

Shelly added that the Navajo Nation Division of Natural Resources and the NNDA will cooperate with Richardson and the Foundation to Protect New Mexico Wildlife.

The agreement has not been signed yet.

Zah added that until the final agreement has been signed the roundups will continue.