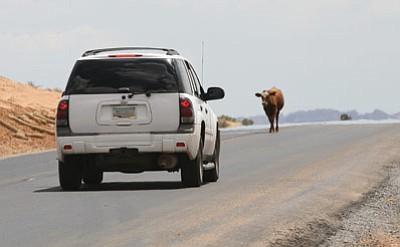 Creating a potential hazard for drivers, livestock can frequently be seen on U.S. 89T. Photo/ADOT

PAGE, Ariz. - The newly paved, shorter U.S. 89T (N20) detour route to Page is now open with no restrictions while the repairs to U.S. 89 are still potentially two years away, the Arizona Department of Transportation (ADOT) announced Oct. 15.

ADOT lifted all restrictions on U.S. 89T now that it has finished installing fencing along the corridor to help prevent livestock from crossing the roadway. With a maximum speed limit of 55 mph, ADOT cautions drivers that the road crosses through open range, and even with the fencing, the road is prone to animal crossings, including horses, goats, cows and dogs.

Along with fencing, crews recently finished final lane striping and installed recessed pavement markings to enhance safety along the corridor.

ADOT will maintain U.S. 89T while it is in use as a detour.

The U.S. 89T project began after a Feb. 20 landslide closed a section of U.S. 89 between Bitter Springs and Page. Prior to paving U.S. 89T, drivers headed to and from Page were forced to take a 115-mile-long alternate route along U.S. 160 and State Route 98.

U.S. 89T is not part of the ultimate solution to repair the damaged section of U.S. 89 along the mountain slope in the Echo Cliffs area.

While residents in Page, Bitter Springs and Marble Canyon are anxious to have U.S. 89 repaired, Dustin Krugel, public information officer for ADOT, cautioned that the official timeframe for the repair and restoration for U.S. 89 has not changed, even though the repair of the roadway is on a fast track.

"We're expecting it to take potentially more than two years to complete, which is based on 12 to 18 months for environmental and right of way clearance and six to eight months for construction," Krugel said.

Krugel said in a best-case scenario it is possible that the repairs to U.S. 89 could be complete by the end of 2014. However, there are some very significant hurdles that would need to be cleared for that to happen.

Whether for right of way clearances or the acquisition of additional land that the project will require, ADOT will work with the Navajo Nation, the Bureau of Indian Affairs, the Federal Highway Administration, the Navajo Justice Department and the Navajo Land Department among others.

The projected $25 million repair is already moving forward quickly. Design for the repair of about 3,700 feet of roadway began in late August. ADOT is meeting with potential contractors and hopes to choose one by the end of the year. ADOT's goal is to start construction by mid-2014.

Based on a geotechnical investigation, which was completed in July, the first part of ADOT's proposed solution for U.S. 89 is to move the travel lanes to the east, closer to the mountain, moving approximately 60 feet (which is outside the state's right of way) away from the active landslide. The second part is to build a rock buttress, a wall-like support structure at the base of the mountain to stabilize the area.

"Both of those will require right of ways to do any kind of work in there," Krugel said. "The good thing is we have been working very closely with the Navajo Nation and the other partners on the U.S. 89T project so... since we have already been working together I anticipate that will help streamline the process."

An environmental right of way can typically take 12 to 18 months, but Krugel said ADOT is trying its best to get everything done as soon as possible and sooner than that timeframe, if possible.

"The restoration of U.S. 89 is our number one priority," he said.

The U.S. 89T project was eligible for reimbursement through the Federal Highway Administration's emergency relief program, which provides funding to state and local agencies for the repair or reconstruction of highways, roads and bridges that are damaged in natural disasters and catastrophic failures.