Bulldogs on a roll heading toward post-season play
Winlow beats Chinle 50-0, now 6-3 for the season 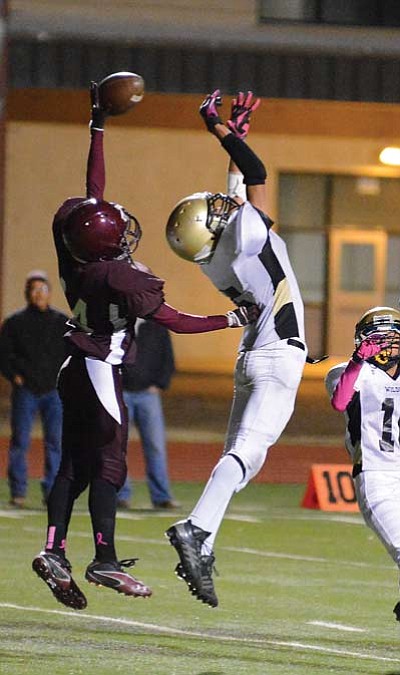 A Winslow receiver tries to pull down a pass from James Martinez. Photo/Todd Roth

WINSLOW, Ariz. - The Winslow High School Bulldogs easily defeated the Chinle Wildcats 50-0 in the last home football game for the Bulldogs. The win improved Winslow's record to 6-3 for the season and dropped Chinle to a 1-8 record. The game was Chinle's eighth consecutive loss.

Winslow lost the ball on a pass interception on their first possession, but that was the only mistake of the first half. The Bulldogs controlled the game on both offense and defense from that point. The Bulldogs' defense controlled the Wildcat offense while the Bulldogs' offense scored on most of their possessions and the defense added a touchdown of its own.

The Bulldogs scored on their second possession with C. J. Chacon rambling the final eight yards for a touchdown. Rodney Davis booted the conversion which gave Winslow a 7-0 lead.

The Winslow defense scored on a pass interception and 53-yard return by Akeem Foster. The conversion increased the Winslow lead to 14-0 with nearly half of the first quarter remaining.

Foster scored the next time the Bulldogs had the ball on a 53-yard run. The conversion increased the Winslow lead to 21-0.

The Bulldogs continued to pull away when James Martinez passed one yard to Henry Montiel for the team's fourth touchdown and a 27-0 lead after the conversion failed.

Foster scored his third touchdown of the game on a 26-yard pass from Martinez. The conversion increased the Winslow lead to 34-0. The first quarter ended with Winslow leading 34-0 and the game essentially headed for an easy Senior Night victory for the Bulldogs.

Chacon had a touchdown run negated because of a holding penalty early in the second period. The Bulldogs took little time to score after that on a 39-yard pass from Martinez to Davis. Davis converted to increase the Winslow lead to 41-0 with much of the first half left to play.

Davis kicked a 37-yard field goal that increased the Winslow lead to 44-0, bringing the 42 point lead Mercy Rule into effect, which meant that the game would be played with a running clock in the second half as long as the lead was that great. The field goal also signaled that the Winslow coaching staff was going to try to keep the scoring limited by avoiding touchdowns and attempting field goals.

The next time Winslow had the ball a runner ran out of bounds intentionally to avoid scoring and Davis converted a 26-yard field goal to increase the Winslow lead to 47-0. Chinle lost a fumble on the kickoff and Davis attempted a long 41-yard field goal, which failed. Winslow declined a penalty on the kick and allowed Chinle to take the ball with little time remaining in the half. The Bulldogs went into the locker room with a 47-0 lead.

The second half scoring began with a long 42-yard field goal by Nick Thomas to give the Bulldogs a 50-0 lead with most of the second half left to play. Winslow punted the ball on first down after a pass interception on their next possession to avoid increasing the margin of victory. The third quarter ended with Winslow leading 50-0 and the only scoring from field goals.

Chinle had a threat against the Winslow reserves but was stopped about a yard from the Winslow goal line and lost the ball on downs. Winslow was not able to gain a first down but the Bulldogs recovered a fumble on the punt and were able to run out the clock.

A large number of youngsters from the cheerleading clinic entertained the crowd. The Senior Night crowd got to see their team put together its fourth consecutive win and increase their chances to earn a home playoff game in the power point system. Winslow may have most of its injured players back for the playoffs.

The Bulldogs will complete their regular season at Page against the Page Sand Devils on Friday. Page was 5-3 going into Friday's game against Window Rock. The game could have playoff implications for both teams.