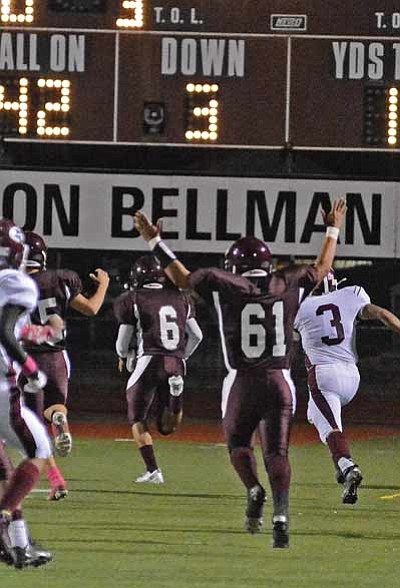 Winslow celebrates a touchdown during their 52-0 win against Ganado Oct. 18. Photo/Todd Roth

Winslow completely dominated the statistics with 374 yards running including 195 by sophomore C. J. Chacon. Winslow had 152 yards passing. Winslow kept Ganado out of the end zone with 115 yards rushing and only 20 passing yards.

The Bulldogs started strong in the first quarter and built a 27-0 lead going into the second period. There was no question about the outcome before that period was over. The Bulldog offense moved at will and the defense handled Ganado with no problems.

The next time Winslow had the ball Martinez passed three yards to Henry Montiel for a touchdown. The 49-yard drive took only three plays while the longest was a 38-yard run by Chacon who ran for nearly a hundred yards in the quarter. Rodney Davis converted for a 13-0 Winslow lead. Davis missed a long 38-yard field goal attempt on Winslow's only non-scoring possession in the first quarter.

Jace Hardy ran four yards for a touchdown on Winslow's next possession and Davis converted for a 20-0 Winslow lead.

Martinez intercepted a Ganado pass and rambled 70 yards for a touchdown near the end of the first quarter and Davis converted for a 27-0 lead as the quarter ended.

Winslow had a scoring opportunity midway in the second quarter but Davis missed a 27-yard field goal attempt.

The Bulldogs got their first score of the second quarter with just over two minutes left in the half on a 38-yard pass from Martinez to Montiel. The conversion failed and Winslow led 33-0.

Winslow threatened in the final minute of the half but did not score, walking off with a 33-0 halftime lead.

Akeem Foster ran four yards for the first score of the second half. Nick Thomas converted to increase the Winslow lead to 40-0.

The Bulldogs scored on a 53-yard drive ending with a four-yard pass from Martinez to Davis. The conversion failed and Winslow had a 46-0 lead. That score brought the 42-point lead mercy rule into effect.

Davis booted a 41-yard field goal with about two minutes left in the third quarter and increased the Winslow lead to 49-0. That was the score entering the final period.

On the first possession of the fourth quarter Davis booted a 37-yard field goal that increased the Winslow lead to 52-0.

Winslow reserves played the entire fourth quarter and much of the third quarter. The victory was never in doubt and the young players got plenty of valuable playing time.

The Bulldogs will play host to the Chinle Wildcats on Friday for their Senior Night game. The Wildcats were 1-6 entering their game with Page. Page, which will be Winslow's last regular season opponent, was 4-3 entering that game.