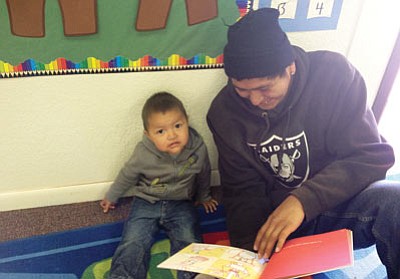 A Hopi father reads to a young boy. The Hopi Lavayi Nest Model Program aims to connect children in Hopi communities to their native language and culture in the critical early years. Submitted photo

What was the first word your baby spoke? Was it mama, papa or was it yuuyu or taata?

In many Hopi communities, Hopi is not the first language spoken by children because it is not spoken in the home.

According to Cynthia Pardo, parent awareness and community outreach coordinator with First Things First, studies show that as English becomes the primary language, the Hopi language, the tribe's oral history, cultural identity and strong early literacy skills are at stake.

First Things First (FTF) Coconino Regional Council in partnership with the Hopi Tribe and the villages sponsored the Hopi Lavayi Early Childhood Assessment Project, which aimed to increase the understanding of early language concerns that village members have about Hopi children birth to five-years-old. This assessment included suggestions for revitalizing Hopi language with sustainable and realistic approaches.

Pardo said one of those suggestions is to develop and implement a pilot language revitalization project, the Hopi Lavayi Nest Model Program, for families with children birth through five-years-old in one of the villages. Hopi language specialists and First Things First will partner to develop the project.

"Research shows that literacy skills learned in a child's first language are later transferred into the dominant language, and children who speak more than one language perform better in school," Pardo said. "The foundation of early learning begins in early childhood. Rich early language experiences do more than teach words, they instill an excitement for learning. Children without early positive language experiences have more to learn when they get to school - and fewer skills to enable that learning. In addition, language acquisition with fluency is more likely if language introduction begins at an early age."

FTF supports native language preservation efforts across the state of Arizona. Along with the Coconino Region, three FTF regions support native language revitalization programs including those in the Yavapai-Apache Nation, Gila River Indian Community and San Carlos Apache Tribe. In 2012, First Things First hosted a statewide symposium to highlight the importance of native language development for kids birth to five-years-old.

Beverly Russell, FTF senior director for tribal affairs, told symposium participants that of the 175 Native American languages spoken in the U.S. today, only about 20 are passed down to children as first languages. The rest face extinction.

"Language is strongly intertwined with culture and identity," Russell said. "(Language) is a major force in the shaping of a person's self-awareness, identity, and interpersonal relationships, and, consequently, success in life."

The Hopi Lavayi Nest Model Program aims to connect children in Hopi communities to their native language and culture in the critical early years. According to the region's assessment findings, almost all respondents said that Hopi language loss is real but there is still hope because there are still plenty of speakers. It is essential that Hopi be spoken to young children everywhere, starting in the home.

In May, the Hopi Tribal Council approved the Hopi Lavayi Assessment and supported the recommendation to set up an advisory committee to develop the Hopi Lavayi Nest Model pilot project in the Village of Sipaulovi.

Dr. Noreen Sakiestewa, director of the Department of Education for the Hopi Tribe and a member of the FTF Coconino Regional Council said all children need to be grounded in their own language.

"Hopi language is so metaphorical, it actually causes the child to think at a higher level of thinking," she said. "So it allows them to become literate. That is our goal-to have them become literate early in life. Teaching Hopi is most effective when learners start at a young age."

Dr. LaVerne Jeanne, project director for the Hopi Lavayi Early Childhood Assessment and a retired linguistics professor from University of Nevada and Hopi native from Hotevilla said the key to reviving the language is to bring Hopi back into the home, where a child is first introduced to language.

"If Hopi children are taught to speak and read in Hopi, those literacy skills learned at home will later transfer into English," Jeanne said. "We want our children to be successful in the dominant language, and many of us were discouraged from speaking Hopi. From the study, respondents said that if we want the language to survive, we will all have to start speaking Hopi. But speaking Hopi is not enough. We must also continue to practice the Hopi way."

"Hopi lavayi is rooted in our culture as a people, if we lose our language, there will no longer be Hopi sinom. Our language defines who we are spiritually," Poleahla said. "If we no longer are able to speak Hopi lavayi then we will never really understand the full meaning of what our Hopi ceremonies mean, even if we participate. The depth of Hopi lavayi cannot be expressed in English; our language is unique to our worldview. We hold great responsibility as stewards of this land we live on and have yet to fulfill our covenant to Maasawu. This transfer of knowledge is usually done through our language and understanding how our cultural reinforces these responsibilities. Hopi lavayi is just not a language; it is a teaching tool of life, it is our life."

According to Jeanne, when culture of context is lost, the culture of language is lost.

"But people still make piki bread and sing and dance. It is not lost yet," Jeanne said. "Children are our future language and cultural bearers and all revival efforts must begin with the children, the very young children and their parents."

What can Hopi parents do?

Pardo said children do best when they have lots of opportunities to talk and interact with parents and other caring adults. A language-enriched environment is important for all children as well.

Sakiestewa suggests talking to one's child in your own language, especially when outside of one's own community.