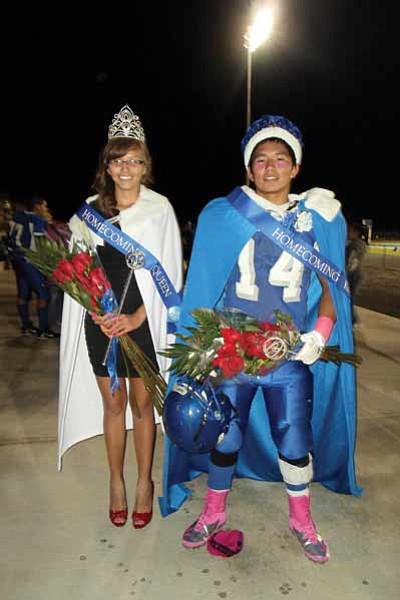 Kira Beaudette was crowned queen and Blake Sekaquaptewa was selected as king during Hopi High's homecoming.

Beaudette said winning the queen's crown was amazing and she will save the crown.

"I thank you for electing me and it means a lot," she said. "I was surprised I won because of all the good competition."

She is considering attending Dartmouth, Harvard, Stanford or the University of New Mexico. She plans to become a general surgeon.

"I want to live up to my potential," she said.

The 17 year old is the daughter of Jennifer and Jeremy Beaudette.

Blake Sekaquaptewa, the key runner for the Bruin football team, said it was cool getting crowned as king.

"I was surprised, but I was also happy," he said.

Sekaquaptewa said he would let his mom do whatever she wants with the king's crown.

"I want to tell the students thanks for voting for me," he said

He is the son of Kim Honyouti and Selwyn Sekaquaptewa.

Kareesa Mahle was the runner up for queen. The other students were Mikayla Paul, third; Jennifer Lomayaktewa, fourth; and Canicia Weston, fifth.

Clayton Howard was the runner up for king. The other students were Lewis Nuvayestewa, third; Domingo Flores, fourth; and Ivern Beatty, fifth.