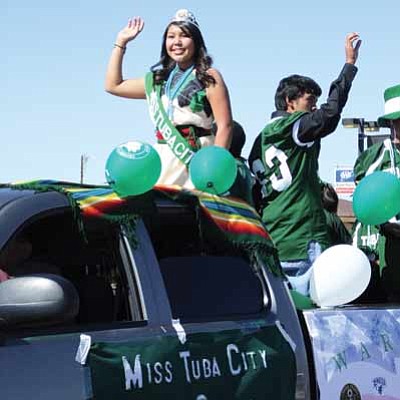 TUBA CITY, Ariz. - It's an event that virtually shuts down the Western Navajo agency town of Tuba City and its neighboring Hopi villages of Upper and Lower Moencopi for a whole day and evening.

Everyone from parents, grandparents, godparents and interested visitors joined in to support the Tuba City High School Warriors team during Homecoming festivities Oct. 11. The parade route was a sea of "Warrior green" T-shirts, banners, balloons and car flags.

This year's royalty court was made up of students from an international mix of Hopi, Navajo, Apache, Sioux, Anglo, Hispanic and African American students.

The school district sponsored parade, which was an hour long, followed a route which started at Tuba City Junior High, made its way down Main Street Tuba, turned the corner at the historic Babbitt's Trading Post to Edgewater Drive and ended at the Tuba City High Warrior Pavilion.

Student built floats and community entries were back-to-back for the parade on a sunny, slightly breezy Friday afternoon followed by the evening football game that had an overflow capacity crowd. The game ticket line snaked around the front of Warrior Pavilion with people waiting to get in even at the end of the second quarter.

It was a sold out game. The Tuba City High Warriors took on the Pinon Eagles. Tuba City came out on top 55-13. The Warriors kept a steady pace, scoring throughout the entire game and handily beating the visiting Pinon team.

With fireworks shooting off each time the Warriors scored a touchdown, the sky was lit up with color most of the last two quarters at the east end goal post eliciting cheers, claps and shouts of praise from the noisy and appreciative Warrior crowd.

Entrants in this year's Homecoming parade designed floats based on the theme "Warriors Around the World."

The theme was meant to showcase Tuba City High alumni who graduated from the high school and have gone on to careers that have taken them all over the world working in engineering, medicine, law, journalism, photography, sports -particularly in the field of running and basketball -neuro-science, teaching, accounting, art, music, dance and culinary arts.

The crowning of the new Homecoming queen and king took place during halftime. Homecoming Queen Summer Tisi and King Drew Winters, both seniors and members of the Navajo Nation, took top Homecoming honors.

Royalty was in abundance in the parade earlier in the day, with many princesses from Tuba City Unified School District Primary, Eagles' Nest, Tuba City Junior High and Tuba City High School also riding on cars, waving happily and throwing candy to the parade crowd.

Entries in the parade also included floats created by alumni. One float commemorated the memory of the late, beloved former Tuba City High math teacher, Mani Rai, who had served as the graduating class of 1994's sponsor.

The parade also featured a special entry by Hopi and Navajo veterans of the Tuba City and Moencopi area, which featured front banner carrier Percy Piestewa, the mother of the late Lori Ann Piestewa, who died in March 2003 in foreign combat.

Piestewa was a former Tuba City High graduate. Both of Piestewa's parents, Percy and Terry, worked and retired from employment at Tuba City Unified.

The parade and homecoming game was a chance for community members, former classmates and old flames to catch up, eat a hog dog or hamburger with a cup of hot chocolate at the game concession and re-live some of their high school days.