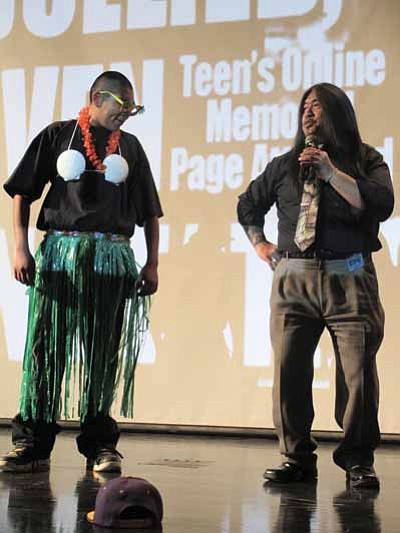 POLACCA, Ariz. - Nobody has the right to hurt other people.

Souza, a social worker in New Mexico, recently spoke to the students at Hopi Junior High and Hopi High School about the seriousness of bullying. Bullying has led some students throughout the country to commit suicide.

Souza recalled that he was bullied when he was in school, but he also bullied others. One incident that stands out was when he took another student's underwear during gym and hung them up for everyone to see.

"He cried, but I didn't care, but what goes around comes around," he said.

The student who Souza bullied became a police officer in Souza's hometown so Souza said he is especially careful not to speed when he is home. Jokes aside, Souza said just like he remembers being bullied, he's sure that the police officer recalls when Souza bullied him. He said many bullying incidents remain with students for life.

Souza said students are bullied for a number of reasons: weight, acne and glasses are just a few. Regardless of the reason, he emphasized that words can hurt.

"You need to stand up for the kids who can't protect themselves," he said.

Souza noted that famous people from Harrison Ford to Christina Aguilera have been bullied, but they didn't commit suicide. However, some students who have been bullied on Facebook or couldn't go to school because they were afraid of bullies ended up taking their own lives.

One in five kids admits to being a bully. Eight percent of students miss one day a month from school because of fear of bullies.

Souza described bullying as intentional, repeated, hurtful acts or words or other behavior committed by one or more children against another child.

"Bullying is a way to get attention, to feel important, to feel more powerful," he said. "The first step to stop bullying is to stand up for yourself. The second is stepping up for the things that are right."

Souza said one girl had more than $10,000 worth of cosmetic surgery because students made fun of the way she looked.

Souza said people wanting to help those who are bullied should let the bullies know that their actions are not okay, then accompany the victim to the appropriate authorities to report the bullying and confirm the story to others.

More information about the bullying prevention program is available from Souza at (505) 879-5112 or at keahisouza@yahoo.com.