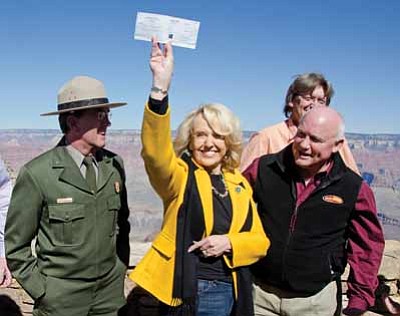 GRAND CANYON, Ariz. - The National Park Service (NPS) announced Oct. 11 that it has entered into an agreement with the State of Arizona that will allow Grand Canyon National Park to re-open and temporarily operate during the government shutdown.

Because of the lack of appropriations from Congress, the Department of the Interior had to close all national parks across the country and furlough more than 20,000 National Park Service employees.

Responding to the economic effects that the park closures are having on many communities and local businesses, Secretary of the Interior Sally Jewell announced last Thursday that she will consider agreements with governors who indicate an interest and ability to fully fund National Park Service employees to re-open national parks in their states.

"This is a practical and temporary solution that will lessen the pain for some businesses and communities in Arizona during this shutdown," said Jewell. "We want to re-open all of our national parks as quickly possible for everyone to enjoy and call on Congress to pass a clean continuing resolution to open the government."

An Oct. 7 NPS announcement of the River Permits Accommodation Plan said that permittees who had launch dates three days prior to opening and including opening day, may choose to get a refund for permit fees and reschedule. River permit holders with the current launch date will have priority to launch on their scheduled date.