Bulldogs take a bite out of Monument Valley 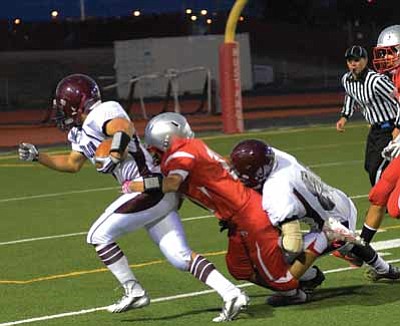 A Winslow runningback powers down field despite a Monument Valley tackle. Photo/Todd Roth

KAYENTA, Ariz. - The Winslow Bulldogs defeated the Monument Valley Mustangs 53-14 in a game played at Kayenta Oct. 11. The win improved Winslow's record to 4-3 for the season while Monument Valley fell to 3-4.

Winslow drove 71 yards and scored on their first possession of the game. C. J. Chacon ran seven yards for the touchdown and Rodney Davis booted the conversion for a 7-0 lead with 8:58 left in the opening quarter.

Monument Valley fell victim to the Bulldog defense on its first possession when James Martinez picked off a Mustang pass and raced 70 yards to score. Davis' conversion gave the Bulldogs a 14-0 lead with 6:49 left in the quarter.

The next time the Bulldog offense was on the field, Chacon scored his second touchdown on a 50-yard run. A successful conversion gave Winslow a 21-0 lead with 3:20 left in the quarter. That was the score entering the second period.

Midway through the second quarter the Bulldogs scored on a one-yard run from Akeem Foster. The conversion failed and Winslow led 27-0.

With 1:38 left to play in the half, Martinez hit Davis with a 36-yard touchdown pass on a fourth down play. The conversion failed and Winslow led 33-0.

The Bulldogs got the ball back and Martinez put together a two play, 39-yard drive with just 50 seconds left in the first half. Nick Thomas booted the conversion for a 40-0 halftime lead.

The Bulldogs scored on their first possession of the second half on a 42-yard pass from Martinez to Demetrius Gamez. Thomas booted the conversion for a 47-0 lead with 6:19 left in the third quarter. That score also brought into effect the 42-point running clock mercy rule.

The Winslow defense scored again when Martinez took the ball away from a Mustang receiver after a complete pass and ran 12 yards for a touchdown. The conversion failed and Winslow led 53-0 with just a minute left in the quarter.

Monument Valley came alive in the final period when Richmond Delmar ran two yards to get the Mustangs on the scoreboard with 6:26 left to play. A two-point conversion pass from Delmar to Keanu Mitchell cut Winslow's still commanding lead to 53-8.

The Mustangs also scored on their next possession on a two-yard pass from Delmar to Jerron Bitloy. The two-point conversion attempt failed and Winslow led 53-14 with less than two minutes left to play.

Monument Valley may still make the playoffs even with four losses because the Mustangs may beat Window Rock, Chinle and Ganado in their remaining games. While the team has an excellent quarterback in Delmar they are not of the caliber of three of the four teams they lost to, Winslow, Show Low and Snowflake. Monument Valley lost to Page by a narrow two-point margin of 28-26.

The win improved Winslow's playoff possibilities and greatly increased the team's likelihood of securing a first round home game. The most difficult section of their schedule is past, leaving games against teams in which the Bulldogs are favored.

The Winslow defense kept the Mustang offense bottled up until the game was decided and the Bulldogs were playing reserves. The Bulldog offense dominated the game as well despite the absence of at least three important starters.

The Bulldogs will play host the Ganado Hornets on Friday in the Winslow Homecoming game. Ganado is 5-2 for the season but has not played a very difficult schedule. The Hornets lost to Holbrook 34-6 and Page 61-28. Their wins were over Many Farms, Hopi, Red Mesa, Greyhills and Chinle.