As tourists turned away from Grand Canyon, other sites benefit
Navajo parks at Lake Powell, Window Rock and Four Corners along with Skywalk stay open through shutdown 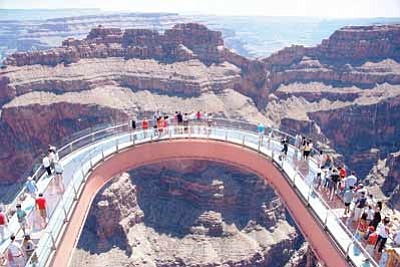 The Grand Canyon Skywalk, a glass-bottomed walkway that takes visitors out to a point 4,000 feet above the Colorado River below, is a main attraction of the western rim of the Grand Canyon, which is owned by the Hualapai Tribe. Photo/Grand Canyon Resort Corp.

WASHINGTON - Arizona's tourism industry has spent nearly two weeks fretting over the economic effects of Grand Canyon National Park's closure. But less than 50 miles to the east, where the Little Colorado River Gorge meets the Canyon, business is booming.

"It's a blessing in disguise," said Roberta John, senior economic development specialist for the Navajo Nation, "and we're taking it for all it's worth."

While most national parks and other federally managed lands are closed to the public during the government shutdown, tribal lands, state parks and privately owned attractions are still open, and are seeing an increase in business as tourists look for alternatives to national parks.

The timing is perfect for the Navajo Nation, which owns the land to the east of Grand Canyon National Park. It has been trying to attract more tourists to its smaller section of the Canyon, even hosting daredevil Nik Wallenda and the Discovery Channel when Wallenda walked a tightrope over the 1,500-foot gorge in June.

Besides the park at the Little Colorado, other Navajo parks at Lake Powell, Window Rock, Four Corners and elsewhere are still open. And Navajo tour guides are giving tours at Canyon de Chelly National Monument, a national park where the visitor center is closed but the land is open to visitors.

John said those tour guides are probably benefiting the most, as they received more calls than usual during the shutdown.

On the other side of the Grand Canyon, the Hualapai Tribe has also seen a spike in visitors at the west rim, as tourists turned away from the closed national park and showed up at their park, said Dawnielle Tehama, a spokeswoman for the tribe.

The West Rim includes the Grand Canyon Skywalk, a glass-floored walkway that juts out over the Canyon 4,000 feet above the Colorado River below.

It is impossible to say how much these alternatives make up for the economic damage to the state's tourism industry because of the national parks closing, said Arizona state parks spokeswoman Ellen Bilbrey.

But she said if the state can get tourists to visit state parks and other attractions, like Tonto Natural Bridge and Lake Havasu State Park, it can minimize the loss of tourism money. Both of those attractions have seen more visitors than usual during the shutdown, Bilbrey said.

"We're trying to do the best we can to help people find a place to enjoy in Arizona so they don't leave the state, because that income is important," she said.

Private helicopter tours of the Canyon are also still available, and the companies that land on the Hualapai reservation are completely unaffected by the shutdown, said John Powers, general manager of 5 Star Helicopters. Like the tribes, as tourists are turned away from hiking or rafting in the national park, helicopter tour companies have seen an increase in business.

Despite the short-term benefits, Powers said he is worried the shutdown might create a sense of hesitancy among those who may be considering a visit to the Grand Canyon, especially among international tourists who have to spend considerable time and money planning a visit.

"It leaves a bad taste in people's mouths," Powers said.

Ceremonial dancers are one of the attractions for visitors to Grand Canyon West. That part of the Canyon is controlled by the Hualapai tribe, which means it can stay open despite the federal government shutdown that closed Grand Canyon National Park.