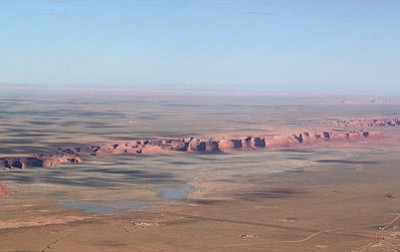 For more than a month, the Navajo Nation received several inches of monsoon rainfall giving life to the high desert plants and creating challenges for reservation travelers in the process.

According to the National Oceanic and Atmospheric Administration, the Navajo Nation received more than 150 percent of the normal amount of precipitation. Portions of Coconino and Navajo County received almost double the normal monsoonal rainfall.

"We have been working the two months to address washouts and flooding across the Navajo Nation," said Paulson Chaco, director of Navajo Division of Transportation (NDOT).

Chaco said NDOT staff worked late into the night and on weekends to get roadways cleared.

"The storms first hit the Eastern Agency in mid-August and continued through into the month of September for the Chinle Agency," Chaco said. "We utilized funds that were earmarked for FY 2014 road maintenance projects to address the flooding. The Navajo Nation needs to do a mitigation plan for these flood plains."

The declaration passed by a vote of 4-0.

The declaration listed 21 Arizona chapters that sustained damages, plus 26 chapters in New Mexico with similar damages, and six chapters in Utah that were also adversely affected by the weather conditions.

Chaco said although NDOT was not in the business of maintaining dams, his crew worked feverishly on Sept. 14 to prevent the Crownpoint Dam from breaching.

Lyneve Begaye, an archaeologist with the NDOT Project Planning Department, said she assisted with emergency services in Crownpoint.

"Crownpoint Dam needed monitoring for environmental and archaeological services. We also took out water and supplies for residents," Begaye said.

NDOT staff used a six-inch pump to begin pumping water out of the dam to relieve pressure. Begaye and others also filled and stacked sandbags to hold back the water.

"We ended up sandbagging and clearing an area for our blade and loader to cut a spillway into the dam to relieve the pressure," Begaye said,

With assistance from the Department of Water Resources, workers cut a deep spillway into the dam heading off a flooding disaster.

On Sept. 16, Shelly requested assistance from FEMA to address the damages from the storm.