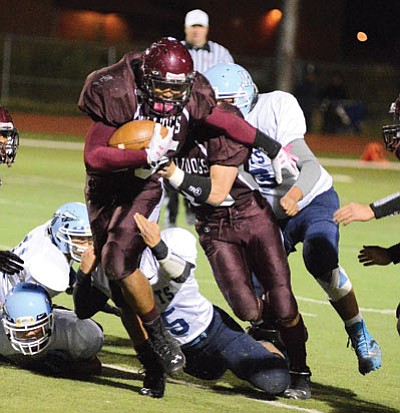 WINSLOW, Ariz. - The Winslow Bulldogs defeated the Window Rock Scouts 59-0 at Emil Nasser Stadium Oct. 4 in a Division IV football game. The win improved Winslow's record to 3-3 for the season and dropped Window Rock's to 2-4 for the year.

The Bulldogs fumbled the first time they had the ball but got it back near midfield on downs and scored on their next possession. C. J. Chacon ran 334 yards for a touchdown, completing a 53-yard, four play drive. Rodney Davis booted the conversion for a 7-0 Winslow lead.

Jace Hardy scored on a 10-yard run on Winslow's next possession. A 25-yard punt return from Chacon set up the score. The conversion gave the Bulldogs a 14-0 lead with 5:49 left in the quarter.

After an exchange of fumbles, Chacon scored again for the Bulldogs on a 32-yard pass from James Martinez. The conversion failed and Winslow led 20-0 at the end of the first period of play.

After another Window Rock fumble at the beginning of the second period, Chacon scored on a 28-yard pass from Martinez. The conversion failed and Winslow led 26-0 with most of the quarter left to play.

The Bulldogs' defense caused another Window Rock turnover, tackling Window Rock's punter on the two-yard line. Martinez scored on the next play and

the lead was 32-0 after the conversion attempt failed.

Julian Avalar scored again for the Winslow defense when he picked up a fumble caused by a tackle from Hardy and rambled into the end zone. Nick Thomas booted the conversion to give the Bulldogs a 39-0 lead.

With 2:44 still left in the half, Demetrius Gamez scored on a 24-yard pass from Martinez. Thomas converted for a 46-0 lead.

The Winslow defense totally controlled the Window Rock offense and caused numerous turnovers, blocked a punt and held the Scouts to minus yardage rushing and less than 50 yards total. The contest was not in doubt by the end of the first quarter. The lead was 46-0 at the half.

The entire second half was played with a running clock but that did not stop the scoring. After another Window Rock fumble deep in Scout territory Martinez ran 19 yards for a touchdown and Rodney Davis converted for a 53-0 Winslow lead which was the score at the end of the third quarter.

Reserves played the rest of the game for the Bulldogs. The Winslow reserves still put up a final touchdown when Julian Avalar ran 34 yards to score. The conversion attempt was downed intentionally to leave the final score a 59-0 Winslow victory.

The Bulldogs will journey to Kayenta on Friday to meet the Monument Valley Mustangs.