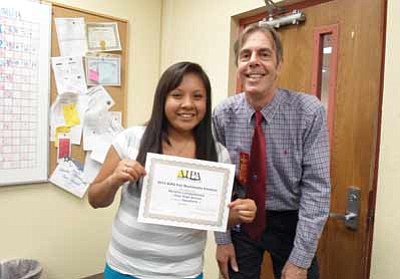 Randi Lomayestewa, editor of the award-winning Hopi High Bruin Times newspaper, earned an excellent for a wrestling story in the Bruin Times.

"I was shocked and surprised that I won. I thought Bindell was playing a joke on me," she said about her journalism teacher Stan Bindell.

Bindell said he is proud of each of the students for winning awards from the state.

"My students work hard and perform great work so I'm happy that they were recognized on the statewide level and learned that they compete with the best high school students in the state," he said.

Bindell noted that unlike sports that compete in different divisions, the AIPA competition includes all schools in Arizona. Hopi competes against all the schools in the Phoenix area as well as Scottsdale and various private schools. Hopi High is also the only Native American high school that wins awards at the AIPA contest each year.

Lomayestewa, a senior, said the award inspires her to do more with journalism. She is considering majoring in journalism in college.

"I don't really remember writing the story because I write so many that it's hard to keep count," Lomayestewa said.

"I'm proud that I have the ability to write a story and get an award for it," she said.

Weston, a senior, said she planned to take journalism again, but took the video news class this year because she wanted to try something different.

Her award winning piece was about a trip to Washington D.C. with the Close Up program where students learn about the federal government and visit monuments.

"I was able to interview students I met there as well as students from our school," she said. "I liked how I was able to get interviews from several people and write a detailed story."

Weston said she remembers writing the Close Up story because it was one of her longest stories. She was comfortable writing about it because she was also experiencing the visit.

Looking back on the story, Weston said she should have improved the vocabulary.

"I was surprised that I got (honorable mention) third place because I never knew my writing was that good," she said.

Weston plans to major in gerontology at either Mesa Community College or Northern Arizona University. She is considering a minor in journalism.

In the news video class, Weston is currently directing the broadcasting team on a story about the percentage of students who go to college. The class hopes that the news video will up on PBS as part of the PBS Student Lab Reporting Site.

Ronelle "Ronnie" Lomayaktewa won an honorable mention for a radio report on a sports event.

"I never expected to win a state award," she said. "I was very surprised and very proud of myself for receiving an award for my sports piece."

Lomayaktewa, a junior, said she loved the radio class.

"It's amazing how you can also visit the radio station and record yourself," she said.

Santia "Skeemo" Coons, who graduated last year, won an honorable mention for her profile story about a high school dropout.

The Hopi High Teen Show, the only live remote Native American Teen Talk Show in the nation, airs on KUYI.

Hopi High School matches dollar for dollar any donations. It will cost each student about $1,200 to attend the event. People can sponsor a student for $600, but any donation is appreciated.