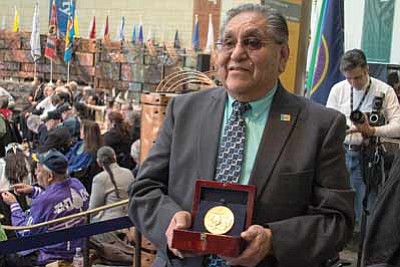 WASHINGTON - Warren Kooyaquaptewa did not live long enough to be honored by his country for his military service, but his daughter said Nov. 20 that the Hopi man would have been proud to see that day finally come.

Kooyaquaptewa was one of more than 200 Native American code talkers, including 12 men from three Arizona tribes, to be honored with Congressional Gold Medals Nov. 20 for their service in the World Wars, a long-kept military secret. Almost all of the medals were awarded posthumously.

"He would have been very, very honored to have received this award," Marlinda Kooyaquaptewa said after the ceremony at the Capitol that House and Senate leaders attended.

"I feel really honored and just so happy that I can even feel my dad's spirit with me here today," she said. "I can just see him all proud."

The Congressional Gold Medal is the "highest expression of national appreciation," according to a House website. Navajo code talkers were recognized with the award in December 2000, but it took 13 years for code-talking veterans from other tribes to earn such recognition.

Code talkers were used as cryptologists by the U.S. military in World Wars I and II, sending messages in codes based on native languages that were considered unbreakable. In seconds they were able to accurately encrypt and decrypt messages that would have taken machines of that day an hour.

At the Capitol, representatives from 25 tribes received medals imprinted with designs unique to the individual tribes. The remaining eight tribes, whose medal designs had not been finalized, will receive their medals at a later date.

Later in the day, 216 silver replicas of the gold medals were presented to the code talkers or their next of kin at the National Museum of the American Indian - including 10 medals for Hopi veterans, one for the White Mountain Apache and one for the Tonto Apache, all from Arizona.

"By adding these men to such lofty ranks, we also mean to add their story," Boehner said. "One worth honoring today - one worth retelling every day."

Senate Majority Leader Harry Reid, D-Nev., recalled a litany of abuses against Native Americans, including teachers who punished children for speaking their native language at English-only schools, telling Indians "their language had no value." But those languages proved valuable when American commanders needed an unbreakable code during World War II, he said.

"The United States government ingeniously turned to the people and languages they tried to eradicate," Reid said. "Their gift (of their languages) saved countless lives and helped win the war - their willingness to share it made them American heroes."

Reid's statements resonated with Hopi Chairman LeRoy Shingoitewa, who said his people "stepped forward," even though Native Americans have not always had full rights as U.S. citizens. The medals acknowledge that Indians were "crucial" to U.S. military success, he said.

Vaniesha Honani, a Hopi and former Navy petty officer, said the recognition not only reaffirms the contribution for tribal members, but it is also "symbolic of how much of a stake we have in the country" to those outside the tribe as well.

Her great-grandfather Perry Honani Sr. was one of the code talkers honored Nov. 20. She said her decision to serve in the Navy came "straight from that legacy" and from her desire to walk in his footsteps and those of her grandfather, Perry Honani Jr., another Navy veteran.

Rep. Ann Kirkpatrick, D-Flagstaff, said she was "beaming with pride" for the code talkers, many of whom also abided by a "code of silence" after the war and never spoke of their role in the war effort.

"In spite of the way our country has treated them (Native Americans), they have tremendous patriotism," said Kirkpatrick, who grew up on the White Mountain Apache reservation and was at the Capitol ceremony.

Geno Talas, a 30-year veteran of the Air Force and the director of Hopi Veteran Services, said there may be other code talkers who have not yet been honored because proof of their service is lost or missing. But he encouraged their families to continue their research.

The congressional recognition brought to an end many years of work, he said, but it also brought closure for many families.