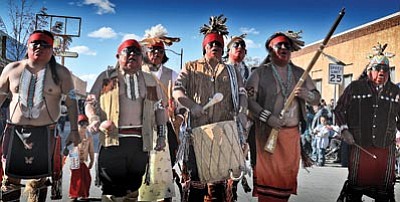 The Winslow Chamber of Commerce and the city of Winslow present the 67th annual Christmas Parade Nov. 23 at 1 p.m. This annual event is one of the largest parades in northern Arizona, drawing residents and visitors alike from all around the state, with as many as 10,000 attendees in previous years.

In recognition of the importance and history of the railroad in the region, this year's theme for the Winslow Christmas parade is "All Aboard! Christmas on the Holiday Express!" Because of the train theme, the Chamber chose the Santa Fe Marching Band, honored guests in the parade last year, to be the Grand Marshals of the parade this year.

The Santa Fe All Indian Marching Band started in the 1930s and performed through the 1950s. Alumni have scattered far and wide but many of them came to Winslow last year for the first time in 49 years to march in the parade.

"They were amazing in their day. They were on the Santa Fe payroll and they traveled all around the world and performed. They were an amazing ensemble," said Bob Hall, CEO of the Winslow Chamber of Commerce. "They had a great time and it was a wonderful reunion for them."

The parade, which always takes place the week before Thanksgiving, lines the streets along Historic Route 66 with both Second and Third streets closed down for the parade route.

The parade lasts about three hours. Hall said he expects anywhere from 80 to 100 entries. Many dignitaries and Native American royalty will be on hand. U.S. Rep. Ann Kirkpatrick will ride in the parade. The Winslow City Council will ride in the parade in a gigantic, 25-foot tall, motorized shopping cart to not so subtly encourage shopping locally.

"Winslow enjoys this day a lot, all of our merchants, they look forward to it because, honestly, it is the busiest shopping day of the year. It's non-stop. All the grocery stores, the restaurants, everybody," Hall said.

Tom McCauley, who owns the Arizona 66 Trading Company, agreed and said people should come early and stay late so they can enjoy the homemade crafts, baked goods and good food.

"Everybody in town gets out, it's the beginning of the shopping season and, of course, the huge emphasis is to please shop local," McCauley said. "Local businesses, local artisans and local jewelers all need the business, everybody needs the business."

McCauley said his trading company supports about 45 different local artists who represent, "a really wonderful mix of all the talent that is in Winslow and the surrounding area."

He said there is an important cycle that happens when goods are bought from his store. The artist takes the money and is able to support their family by buying goods from stores in Winslow, the city ends up with the sales tax and is able to work on capital improvement projects.

"The whole cycle when it works correctly, it really helps to support itself," McCauley said.

Hall said in addition the parade brings lots of people home who may have grown up in Winslow or in the area and live elsewhere. They line the parade route or participate in the parade.

"I think that's why it's been going on for 67 years now. It certainly is a Winslow tradition," Hall said. "It is a huge social event because there are just tons of people."

The day kicks off with Santa and Mrs. Claus at the Winslow Visitor Center (523 W. Second St.) from 9:30 a.m. to noon, sitting with toddlers, getting pictures taken and handing out goodie bags. This is also a chance for the kids to let Santa know what is on their Christmas list. A toddler carnival will also take place all day.

Hundreds of vendors will line both Second and Third Streets, where visitors can stroll looking at arts and crafts, clothing, jewelry, toys, holiday decorations and more. The stores will all be open and the streets closed.

Hall said while the chamber sponsors the event, it is a city-wide undertaking with a lot of help from many in the community.

He said he expects most will follow the theme of the parade, but all entries are welcome and Hall reminded people that entry in the parade is good business.

"Being in the parade is a really good opportunity for businesses to advertise. We don't charge vendors for entry in the parade," Hall said. "What a great opportunity to promote your business, especially at the onset of the holiday season. You have an audience of thousands of people."