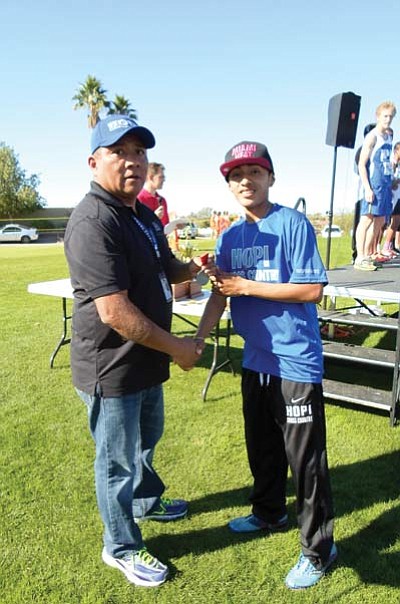 Hopi High coach Rick "the Legend" Baker said excitement was in the air before the race. That excitement continued after the race with fans shaking team members' hands as soon as the race ended.

"Everybody thought we won, but the race results weren't official yet," he said.

Facebook and social media lit up with comments about the Hopi High championship.

"We were a little shaky coming in, but we pulled it off," Baker said.

Baker said the Bruins were a bit unsure coming in because Anfernee Howard and Slim Jackson were nursing injuries. Howard had problems with shin splints and Jackson had leg problems.

"I'm never satisified, but when you win the state title you have to be happy," Baker said. "It was awesome to win another state championship. It is beyond my belief to win 24 straight titles. It never gets old. The credit goes to the kids."

"This year was different because we weren't as talented so it took more coaching and the guys had to work harder," he said. "We had to keep them together as a team."

Hopi High will lose three seniors to graduation, but four returning runners will form the nucleus of next year's team.

Howard, a junior, said it felt good to win another state championship because it showed that the Bruins' hard work paid off.

Howard said the race was competitive.

"Each team and individuals have their strong points, but Hopi was stronger," he said. "The key to winning was knowing our state title is on the line and no one was going to take it from us."

Howard is looking forward to working toward the Bruins' 25th straight state championship next year.

Jackson said he was happy to see another title for Hopi High. He said this year was different for him because it was the first year he ran at state.

"We ran very strong fighting for that state title," he said. "The course was fun, but the heat and the rolling hills hurt. I was trying to fight the heat, but I was already sweating at the start."

Jackson said the race was competitive because Pusch Ridge and Pinon were racing side by side with them. He said the key to winning was teamwork.

He plans to run track in the spring and join the Army after high school.

Baker said he and his team will enjoy the championship and then start thinking about next year.

"It will depend on the four returners, how hard they are willing to work during the track season and the summer, but so far we've had good results," he said.

Josh Hoskinson from Arizona Lutheran was the individual state champion with a time of 16:14 in the race with more than 140 runners.