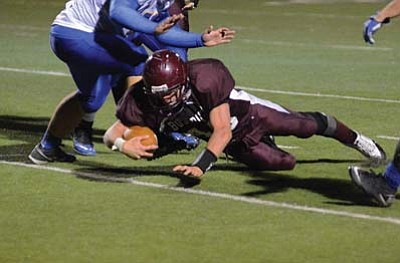 A Winslow ball carrier stretches for extra yards. The Winslow Bulldogs dominated the Sahuarita Mustangs for a 38-14 first round win Nov. 9. Photo/Todd Roth

The Winslow Bulldogs defeated the Sahuarita Mustangs 38-14 in a Division IV playoff game at Emil Nasser Stadium in Winslow Nov. 9.

The win improved Winslow's record to 8-3 for the season and earned them a berth in the next round against Seton Catholic in Chandler on Saturday. Sahuarita ended its season with a 7-4 record.

Kelly Wood rushed for 236 yards while the Winslow offense controlled the game.

The Bulldogs drove 64 yards on their opening possession only to be stopped inside the Mustang one-yard line. The Winslow defense got the first score of the game on Sahuarita's first play from scrimmage when Austin Maddox and several others stopped the running back in the end zone for a safety creating a 2-0 lead with 8:26 left in the first quarter.

The Bulldogs took the kickoff following the safety and drove 59 yards to the one yard line again where Wood scored on a one-yard run. Rodney Davis booted the conversion for a 9-0 lead with 4:32 left in the quarter.

The Bulldog defense held Sahuarita on a fourth and short yardage to go and took the ball at the 46 yard line. Winslow drove to the shadow of the goal post where Davis booted a 27-yard field goal for a 12-0 lead with just half a minute left in the first quarter.

Sahuarita lost a fumble on the kickoff giving Winslow the ball at the Mustang 14 yard line. The first quarter ended with the Bulldogs leading 12-0 and threatening to score again.

Wood scored from the six-yard line with 11:11 left in the half. The conversion failed and Winslow led 18-0.

James Martinez passed nine yards to Demetrius Gamez the next time the Bulldogs had the ball. The conversion failed and Winslow led 24-0 with 6:26 still left in the half.

Martinez intercepted a Mustang pass and ran to the Sahuarita 36-yard line. Martinez then passed 13 yards to Davis for the touchdown. Nick Thomas booted the conversion for a 31-0 lead with just 1:44 left in the half. Winslow intercepted a pass near the end of the half, which ended with the Bulldogs leading 31-0.

The Bulldogs got the only score of the third quarter on a drive and a 28 yard run by Kelly Wood. Nick Thomas converted for a 38-0 lead with just four minutes to go in the third period.

Sahuarita got on the scoreboard midway through the final period on a nine-yard pass from Rocko Vega to Milo Fragoso. Carlos Lopez converted to cut the Winslow lead to 38-7.

Minutes later Vega ran 15 yards for the second touchdown for the Mustangs. Lopez booted the conversion to cut the Winslow lead to 38-14.

The Bulldogs will play the Seton Catholic Sentinels at Chandler at 6 p.m. on Saturday. Seton Catholic defeated Combs 55-17 in their first round playoff game to improve to 10-1 record for the season.

Other Saturday games include Safford at Show Low, Coolidge at Blue Ridge and River Valley at Snowflake in what may be the most difficult game to predict.