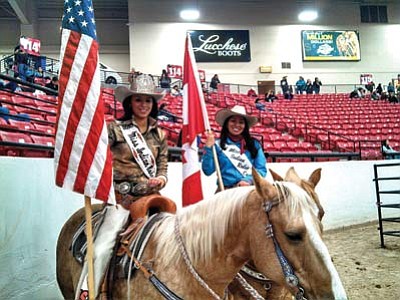 The first INFR was in Salt Lake City, Utah in 1976.  Since then the event has taken place in different locations with the last six finals in Las Vegas, Nev.

Native American cowboys and cowgirls came together from across Indian Country including the United States and Canada.

The rodeo culminated with the bull riding event.

Spectators held on to their seats as the Shiprock, N.M. cowboy, Julius Begay, did what he does best - riding the full eight seconds to place first for the first go round of the bull riding event.

Others were not so lucky, especially in the calf roping event.  There were many "no times" for the ropers.

The event ran through Nov. 9 to determine the next champion of the 2013 Indian National Finals Rodeo.