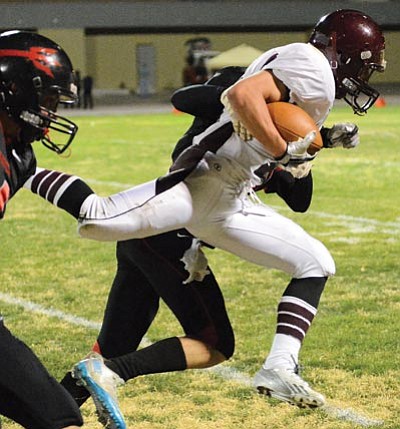 The teams came into the game with identical 6-3 records battling for a favorable playoff position. Winslow improved to 7-3 while Page fell to 6-4. The Bulldogs likely clinched a home playoff game while Page will likely open the post season on the road.

The Bulldogs established dominance early in the game. Winslow scored at will in the opening period and kept the Sand Devils bottled up in their own territory. It quickly became evident that Winslow had a speed advantage. Winslow had a 20-0 lead after the first quarter and threatened to score again. The offensive dominance continued throughout the game and the Bulldogs appear likely to advance past the first round of the playoffs.

The Bulldogs scored the first time they touched the ball and took a 7-0 lead with about two minutes played in the first quarter. James Martinez intercepted a Sand Devil pass at the Page 17-yard line. Kelly Wood scored three plays later on a one-yard run. Rodney Davis booted the conversion.

Winslow scored again the next time they had the ball on a 15-yard run by Jace Hardy. The play followed a punt return to that position from Akeem Foster. The conversion failed and Winslow led 13-0 with eight minutes left in the quarter.

The Bulldogs scored the third time they touched the ball on a 36-yard pass from Martinez to Davis. The play completed the first long drive for the Bulldog offense as they marched 92 yards for the score. The conversion gave Winslow a 20-0 lead with a couple of minutes left in the first quarter. That was the score at the end of the quarter but Winslow was threatening to score again.

Page held the Bulldogs at their 10-yard line and Davis' field goal attempt went wide. This was the first time the Bulldogs failed to score on a possession.

Martinez scored on a one-yard quarterback sneak to complete a 47-yard drive the next time the Bulldogs were on offense. The conversion failed and Winslow led 26-0 with more than half of the second quarter left to play.

The Sand Devils played better defense for the rest of the second quarter and the first half ended with Winslow leading by 26-0.

The Bulldogs started the second half with a 63-yard drive and scored on a 10-yard fourth down pass from Martinez to Henry Montiel. The conversion by Davis increased the Winslow lead to 33-0 with more than seven minutes left in the third quarter.

Martinez scored on a 25-yard run the next time the Bulldogs had the ball. Page blocked the conversion kick and Winslow led 39-0 with about three minutes left in the third quarter.

Davis picked off a Sand Devil pass to set up the next Bulldog touchdown. Martinez passed 25 yards to Montiel for the touchdown. The conversion failed but Winslow still led 45-0. The lead brought the running clock rule into effect with just about a minute left in the quarter,

Page fumbled and Winslow missed a 37-yard first down field goal attempt to cease running up the score. The third quarter ended with Winslow leading 45-0.

The Winslow reserves played the entire fourth quarter and with the running clock the game went quickly and ended with the Bulldogs winning 45-0.

The victory means the Bulldogs will play host to a first round playoff game at Emil Nasser Stadium Nov. 9 at 6 p.m.