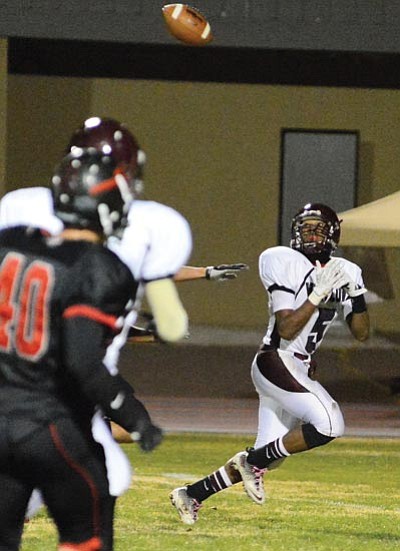 Kelly Wood catches the ball and does a U-turn on the 19 yard line and moves the ball up to the 45 yard line during a game against the Page Sand Devils Nov. 1. Photo/Todd Roth

WINSLOW, Ariz. - The Winslow High School Bulldogs will play host to the Sahuarita Mustangs in the Division IV state football playoffs on Saturday at 6 p.m. at Emil Nasser Stadium. The teams hit the playoffs with identical 7-3 records.

Sahuarita's other losses were to larger schools. Catalina Foothills pounded the Mustangs 51-6 midway through the season and Amphitheater defeated the Mustangs 35-28 in the seventh game of the season. Winslow's other losses were to the Snowflake Lobos 46-14 at Snowflake and to Estrella Foothills 42-27, also on the road. The Bulldogs were without several key players because of injury during the loss to Estrella Foothills.

If the Bulldogs win on Saturday they would play the winner of a game between Seton Catholic and Combs. That game will be played at the home of the higher seed. To play host to a second playoff game the Bulldogs would have to beat Sahuarita and have the Combs Coyotes upset the Seton Catholic Sentinels.

Other first round games include the Payson Longhorns at the Show Low Cougars, the Safford Bulldogs at the Estrella Foothills Wolves, the Fountain Hills Falcons at the Coolidge Bears, the Monument Valley Mustangs at the Blue Ridge Yellowjackets, the Rio Rico Hawks at the Snowflake Lobos and the Page Sand Devils at the River Valley Dust Devils.