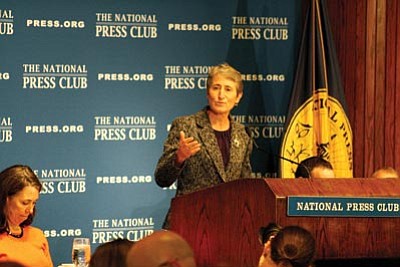 WASHINGTON - Interior Secretary Sally Jewell cited the Colorado River and Lake Mead as examples of the water conservation problems that she called one of the top issues facing her department.

And that problem will only get worse as climate change creates more extreme droughts in the Southwest, Jewell said. Her remarks were part of a wide-ranging speech at the National Press Club Thursday in which she defended the closure of parks during the federal government shutdown and called on Congress to provide sufficient park maintenance funding.

On water issues, Jewell said the region has not done enough to conserve water and that the federal government needs to work with states on conservation efforts. She also said the Colorado River Basin's water issues are a symptom of climate change.

"Climate change is upon us," she said. "You see it in droughts throughout the West. You see it in the Colorado River. If you look at the levels in Lake Powell or Lake Mead or any of the other lakes that are in that region, you will see that we have a huge problem."

Her comments came the same day that more than 80 public officials from the Colorado River basin - including 16 local government officials from Arizona - sent a letter to the Interior Department supporting water conservation measures.

While thin on specifics, the letter supported "urban and agricultural water conservation" and urged state and federal governments to follow up on a 2012 Bureau of Reclamation report that warned about the future of the Colorado River.

That report said the Colorado is not on track to keep up with the demand on its water. It said the river's water supply could be reduced by 10 to 20 percent by midcentury, creating a deficit that would be exacerbated by the area's rapidly growing population.

Demand for Colorado River water may surpass the river's supply by 2060, the report said - or even by 2025 in extreme circumstances.

The report also said the Central Arizona Project (CAP), which serves the Phoenix and Tucson areas, could face a water shortage. If Lake Mead drops below 1,025 feet above the mean sea level, the CAP's supply would be reduced by a third, the report said.

Liz Archuleta, a member of the Coconino County Board of Supervisors, said she hoped the Interior Department would follow up on the Bureau of Reclamation report by supporting education efforts on water conservation. Educating people on planting desert plants in their yards and turning off the water when they brush their teeth could make a significant difference, Archuleta said.

Archuleta, who traveled to Washington with the Colorado River advocacy group Nuestro Rio in late September to meet with Jewell and members of Congress, said she was glad to hear that the secretary considers the river a high priority.

"When you're looking at the Colorado River, which is the lifeblood for so many people, we cannot continue to use as much water as we are now," Archuleta said.