Hopi High students motivated to stay away from drugs and alcohol 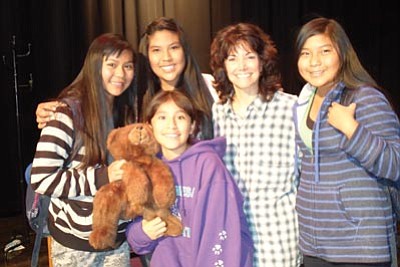 POLACCA, Ariz.- Susie Vanderlip, who performs a one woman theatrical show for youth to give them hope, enjoyed her second performance at Hopi Jr./Sr. High School Oct. 30.

Vanderlip, who performed at Hopi High two years ago, uses a variety of music, including rap, to engage the student audience. The students at Hopi Jr./Sr. High responded with interest.

"The students were really engaged by listening and responding with either laughter or silence," she said.

The laughter came from the fun in the performance; the silence come from the seriousness of the message about not abusing alcohol or drugs.

"You can feel when an audience's heart is open," she said. "The students responded respectfully, thoughtfully and intelligently."

Vanderlip, who lives in California, said she likes Hopi Jr./Sr. High School because the students and workers have a sincerity and genuiness about them.

Hopi High Principal Glenn Gilman introduced the performance by talking about students who never graduated because they abused drugs or alcohol.

Vanderlip said students with problems, whether it's drugs, alcohol or something else, should know that they need to reach out for help.

"If students are hurting, feeling worthless or feeling hopelessness they need to reach out to somebody," she said. "All students should know that they are worthy."

Vanderlip doesn't usually drink because she's seen too much pain or suffering because of it, but she is not for total prohibition. She said an occasional drink of wine or beer won't hurt. When she was in Paris, she broke down and had a glass of wine, but usually there are "too many good things to do that alcohol isn't needed."

Regarding bullying, Vanderlip said bullies and their parents should be referred to counselors to find out the reason for the bullying.

"Bullies are made, not born," she said. "If someone is being bullied, they need to stand up and protect themselves." That could mean reporting the bullying to a teacher, school official, security guards or police.

Vanderlip said her one woman dance and drama show came from a higher calling.

"I was called by a higher power," she said. "I got in the dance studio and it just came out."

Vanderlip, whose company is named Legacy of Hope, addresses underage drinking and drug use, communication between parents and youth, domestic violence and bullying, stress management, mental health, depression and disillusionment, and self harm and suicide to hope and joyfulness.

Vanderlip turned to these motivational performances because she lost friends to drug and alcohol abuse. She loves dance and music. She also teaches zumba classes.

Vanderlip is an expert on the life cycle of Monarch butterflies, having raised more than 400. She has videotaped and photographed their life journey and produced children's books and movies about the Monarchs that are used in school districts and botanical gardens.

An interview with Vanderlip by the Hopi High video news class can be viewed on the Hopi Jr./Sr. High School website. Jillian Sahneyah provided the interview and Canicia Weston served as director for the video.

More information about Vanderlip and Legacy of Hope is available at www.legacyofhope.com or by email at svanderlip@aol.com