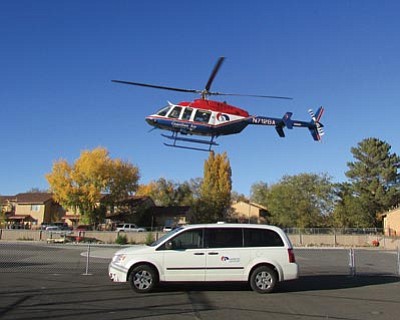 A Guardian Air helicopter takes off from Tuba City Regional Healthcare Corporation. Guardian has operated out of Tuba City for one year. Submitted photo

TUBA CITY, Ariz. - On Oct. 25, Guardian Air put on a thank you party for the staff at Tuba City Regional Healthcare Corporation (TCRHCC) to celebrate the one year anniversary of the medical helicopter flying from the hospital and the partnership between TCRHCC, Guardian Air and Flagstaff Medical Center (FMC).

About 365 staff members attended and then afterward there was a trunk or treat for the kids for Halloween. Staff handed out candy from the helicopter and the critical care truck that is sent out during severe weather when the helicopter cannot fly.

During the past year, the medical helicopter stationed at Tuba City's hospital has gone out on about 400 flights serving everything from calls about abdominal pain and general illness to calls for cardiac, trauma and pediatric patients.

The helicopter was stationed at Tuba City Regional Healthcare Corporation because of its strategic location. The helicopter flies across both the Navajo and Hopi reservations where providing care to patients and getting patients to the correct medical center quickly had proven a major challenge.

Jake Dalstra, marketing and business development manager with Guardian Air, said getting a trauma patient from the reservation or from Tuba City to Flagstaff Medical Center in the "golden hour," is something that was not possible prior to having the helicopter at Tuba. But now that there is a helicopter, a trauma patient can be transported to FMC within that golden hour, increasing the chance of not only survival but a better outcome for the patient.

"When you start having a heart attack, time is what we call muscle. The quicker we can get that clot relieved the better chance of survival for that patient," Dalstra said. "The same with stroke patients and neuro patients. If we can get those patients to the neurologist so they can get the appropriate treatment, the better the survivability is for the patient."

Dalstra said the partnership between TRHCC, FMC and Guardian Air is an important one that makes a difference in communities on the reservation, especially because the helicopter has allowed Guardian Air to get patients to Flagstaff or Phoenix quickly to get them the help they need.

"It's been a great partnership. It has been a wonderful relationship. We are able to help the people of Tuba City and help the citizens have better access to healthcare," Dalsta said. "It is a tremendous asset to have our people right there on campus, at a moment's notice away."

The helicopter staff, which includes a flight nurse and a paramedic, are all experienced with a minimum of three to five years emergency room (ER)/intensive care unit (ICU) experience. They also attend a six month training academy where they get intense training on critical care and emergency medicine so Guardian Air knows they are sending extremely well-qualified people out to handle calls.

The helicopter carries everything that an ER, ICU or obstetrics department or pediatric department would have and all of that equipment needs to fit onto the helicopter and still allow it to take off.

"We have to be ready for any type of patient... yes, we have a lot of equipment on there," Dalstra said.

In case of severe weather when the helicopter cannot fly, there is a critical care ground truck which gives the same level of care as the helicopter and is equipped the same way. The truck is dispatched out of Flagstaff and the flight crew will board the truck to provide care back to the destination.

"We're the only flight program in northern Arizona that has that capability," Dalsta said.