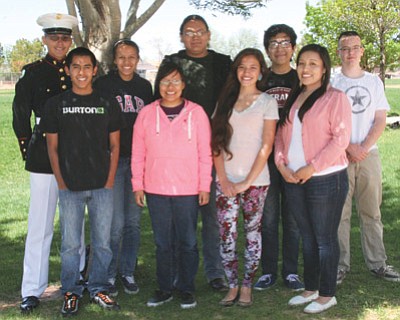 TUBA CITY, Ariz. - The competition is tough to get into college. The final year of high school is long with testing and more testing, endless applications, financial aid assessments and then waiting and hoping for a letter of acceptance from the college or university of a student's choice. Some students hope a full ride scholarship will accompany that final acceptance letter.

Ten of this year's brightest and most promising seniors, among many others at Tuba City High School (TCHS), will head to college this fall, scholarships in tow.

Jaren Numkena, 17, of Navajo and Hopi tribal descent and the son of Louise and Alan Numkena from the Todich'ee'nee clan, qualified for a Gates Millenium Scholars award. Numkena is interested in pursuing a career in engineering and credits Tuba City High Schools' accelerated program classes as his best academic support in preparing him for college.

Numkena also said that President Barack Obama is his role model in overcoming obstacles and racial prejudice in achieving both academic and career goals. Numkena said he also enjoys working in his family Hopi fields in the Kerley Valley during his quiet at home time.

Kenard G. Dillon II, from the Navajo Nation and the son of Kenard Dillon and Maxine Sandoval, received a full ride scholarship from Harvard and is also a final qualifier for the Gates Millenium Scholarship.

Dillon is interested in history for his undergraduate studies and then would like to pursue a law degree. Dillon credits his grandparents, Merrill and Lorraine Sandoval, and teachers Cynthia Robbins, Tom Jones and Effie Hyden for inspiring him to pursue higher education and to reach for the highest, brightest academic stars. He also credits biology and English classes at Tuba City High School for "challenging him academically and expanding his intellect."

Kristen Becenti, 17, from the "One Who Walks Around" clan, is the daughter of Roland and Veronica Becenti. Becenti was a highly recognized volleyball star this year at Tuba City High school. She accepted a volleyball scholarship to Glendale Community College and plans to complete a physical therapy degree.

Becenti credits her parents as her inspiration for working hard and achieving her career and life goals. Becenti also credits teachers Tom Jones and Effie Hyden as her academic mentors. She enjoys church activity, reading and spending quiet time with her immediate family.

Christopher Honahnie, 18, from the Navajo "Manygoats" clan and "Ishwungwa (Coyote) clan on his Hopi paternal side, is the son of Tanya Tso and Troy Honahnie, Jr. Honahnie is the winner of the Walter Winterhoff Scholarship and will study public health in college. Honahnie lists his mom, Tanya Tso, a teacher in Tuba City, as his inspiration and credits Tuba City High School with providing him with academic challenges through the honors and accelerated programs helping him prepare for college. Honahnie says in his free time he enjoys running and traveling.

Emerald Byakeddy, 18, from the "Manygoats" clan born for Water's Edge people, is the daughter of Emerson and Anna Biakeddy. Byakeddy has qualified for the Gates Millenium Scholar award and also a Chief Manuelito Award from the Navajo Nation. Byakeddy will major in biology at Arizona State University. Byakeddy credits her grandfather for her academic and social inspiration. She said her grandfather encouraged her everyday and was there to support her throughout her life. Byakeddy thanked teacher Maria Goatcher for her academic mentorship and said the accelerated programs at Tuba City High helped her understand and study for her upcoming university career. Byakeddy performed well in cross-country and track beginning in her sophomore year and is a member of the National Honor Society.

Shelden Lok'aa Neez Coolie, 18, from the Lok'aa Dine clan is the son of Rose Coolie. Coolie has been in the top ten of his class since his freshman year at Tuba City High and will pursue mechanical engineering or mathematics when he gets to college. Coolie is a member of the TCHS Marine Corps Junior Reserve Officer Training Corps program as well as an avid welding student. Coolie will attend the Marine Corp Naval Academy in New Port, Rhode Island in a one year program and then will move to the four year program in Annapolis at the U.S. Naval Academy.

Isabella Shey Robbins, 17, from the Bilagaana and Naakai Dine clans from the Navajo Nation is the daughter of Cynthia and Tony Robbins. Robbins will attend Stanford University and has qualified for the Chief Manuelito Scholarship from the Navajo Nation. She will study theater arts and dance. Robbins credits her father as her greatest supporter. She said he overcame many struggles in life and became a successful accountant. She also credits her grandfather for daily inspiration.

Robbins also credits TCHS for giving her opportunities outside of daily school, such as her Philips Exeter summer school and her honors and accelerated programs classes that she said she knows will help her once she gets to Stanford.

Ryan Moran, age 17 from Irish, Italian and Croatian descent, is the son of Kathleen O'Connor-Moran and Kenneth Moran. He is Tuba City High School's highest academic achiever for 2013. Moran is the Valedictorian for TCHS and received the Wildcat Excellence Scholarship from the University of Arizona. Moran will study biology and said his parents are his biggest inspiration for academic and life achievement. Moran will graduate with a 4.4 grade point average.

Stephanie Antonia Geneeha, 18, from the Tse'deeshgizhnii (Rock Gap) clan is the daughter of Rosemary and Garry Geneeha. Geneeha qualified for the Gates Millenium Scholar award as well as the Obama Scholarship and Presidents Award. Geneeha will study biology at Arizona State University this coming fall and is an aspiring dentist. Geneeha is the Salutatorian for TCHS and said her maternal family gave her encouraging words every single day of her life for her success. Geneeha will graduate will a 4.2 grade point average.

Tristan Tsosie, 18, from the "Tangle People" clan is the daughter of Jerilyn Tsinigine and David Tsosie. Tsosie won the Wildcat Excellence Award from the University of Arizona and plans on studying to become a pharmacist. Tsosie said Tuba City math teacher Raye Lynn McCabe, also her aunt, is her greatest academic mentor and her mother Jerilyn Tsinigine is her life inspiration.