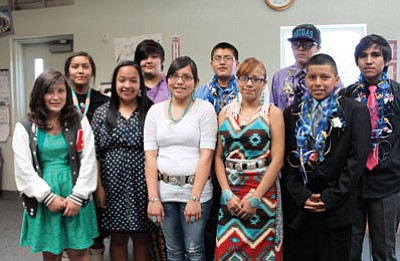 Ten eighth grade students from STAR School who raised money for a trip to Phoenix after their graduation May 23 decided to donate their trip money to victims of the Oklahoma tornadoes instead.

FLAGSTAFF, Ariz. - Ten eighth grade students from STAR School who raised money for a trip to Phoenix after their graduation May 23 decided to donate their trip money to victims of the Oklahoma tornadoes instead.

Nizhoni Boyer came up with the idea after seeing footage showing the devastation from the tornadoes over the course of the weekend. She brought the idea to her classmates. The kids voted by silent vote and all agreed to give up their trip to help others.

"The Lakota people have a saying, 'we are all related,'" Boyer said. "This is why we felt compelled to reach out and help and give up our class trip and donate the money and in doing so, we honor the resilient people of Oklahoma and their relatives."

The school teaches the concept that everyone is related. STAR is an acronym that stands for Service To All Relations. Director of STAR Mark Sorensen believes the kids are embodying the spirit of what STAR is all about.

"I'm very proud of them because their action reminds me that they have really taken to heart this idea of being of service to all our relations. Of course our relations include those unfortunate folks in Oklahoma," Sorensen said. "To me, it is kids like this and actions like this that make the world a better place. I am just delighted and proud of them."

The kids raised more than $1,000 dollars for their trip through car washes, a bake sale, food sale and a cake walk. And most of the kids, bussed in from around the Reservation and Flagstaff, have never been to Phoenix, or a waterpark, which is where they were going, or stayed in a hotel before.

"This is a big deal for them, a big deal to go to the water park, to go to the Metro Center and to stay in a hotel," said Nizhoni's mother Elysie Boyer. "The school doesn't have money for such things, so they have been working hard raising this money."

"It is a big deal for them," Sorensen said. "The fact that this is their decision, not ours, none of the adults that I know of pushed it or anything like that. That makes it even better."