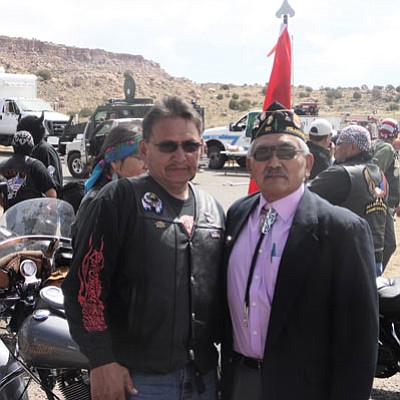 FLAGSTAFF, Ariz. - In 2002 Larry Noble, Bobby Martin and Lon and Lori Parker established the Navajo Hopi Honor Riders to honor the late Lori Ann Piestewa, the first Native American-Hispanic woman soldier to die in a foreign war. The Honor Riders have grown from 15 original bikers to more than 300 members.

This year's Honor Run took bikers, families and chase vehicles from Window Rock to Ganado, the Hopi Reservation, Dilkon, Birdsprings, Leupp and finally to Flagstaff for a sunset dinner at the home of Percy and Terry Piestewa, whose daughter inspired the original run.

Riders travelled to Cameron, Tuba City, Inscription House and Kayenta on the second day of the run.

After spending the night in Kayenta, the riders travelled to Beclabito, Shiprock, Red Valley, Lukachukai, Window Rock and a final stop at Chilchiltah Veterans Park to conclude the ride.

Co-founder Larry Begay headed up this year's Honor Run. Begay along with his wife Shelly, who serves as the NHHR webmaster and organizer, allowed original founder Larry Noble a chance to take a year off from organizing the riders on the 2013 run. Noble did participate in the run but chose to man one of the chase vehicles behind the riders.

One of the highlights of this year's run was Hopi Post No. 80 Lori Piestewa's crowning of a new 2013-14 Post Princess. Begay crowned Telisha Poleahla, from the Sun Forehead clan of Shungopavi and a sophomore at Hopi High School, at the Hopi Cultural Center on Second Mesa, where the honor riders took a ride break.