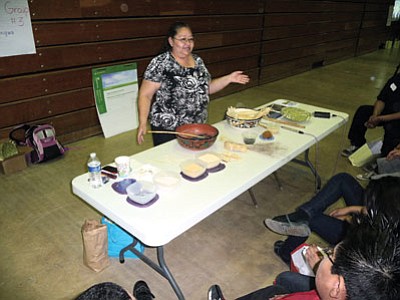 Clara Dallas speaks Hopi as she teaches the names of Hopi food and ingredients at a recent workshop. Photo/Kristin Harned

FLAGSTAFF, Ariz. - Mesa Media Inc. will play host to an instructors workshop at the Hopi Wellness Center in Kykotsmovi June 18 from 9 a.m. to 4 p.m. for 50 fluent Hopi speakers, parents and teachers. The workshop will give participants five basic activities that they can use to teach younger generations in an effort to get more kids speaking Hopi.

"We are trying to mobilize people in communities and get them a little bit of the skills and jump start their creativity, because they are fluent speakers, and have them go out to the communities," said Krisin Harned, treasurer and grants officer for Mesa Media. "We have a librarian attending, which is great because she can do stuff at the library and we have another person attending who works with younger kids programs and she can take the information to her teachers."

Harned said three grants will provide money for the workshop. The workshop will focus on teaching agricultural vocabulary, sentence structure and songs.

"All three of the grants gave us funding for this series of workshops," Harned said. "We'll be able to hire community members who are fluent speakers to do part of the instruction in the workshop."

Harned said the younger generations are who Mesa Media is trying to reach and time is critical.

"We've got to get to the kids. This is the last generation where the kids are gonna be able to talk with fluent speakers," Harned said. "Otherwise they're just going to be stuck listening to it on a CD or a movie. But now there are these people who are still speaking and they're fluent."

Harned emphasizes that her group is not the only organization working for language preservation, but that her group seeks to capture kids' attention through song and through technology because Hopi is all about song and kids start dancing and singing at very young ages.

"We do see great success, kids will all of a sudden just start singing a song and they don't even realize, Oh, I'm talking Hopi, I'm saying the words and learning pronunciation and that is our goal to get them speaking Hopi again," Harned said.

Poleahla and Secakuku both believed that all Hopi people deserve the opportunity to understand the richness of the Hopi language and its teachings and that the continuation of their cultural beliefs depends on people's ability to speak Hopi.

"Our elders share with us their teachings and want to help us learn. They are the keepers of our valuable knowledge and skills. They are the ones who know the importance of the language," Poleahla said. "This is the knowledge that we are losing very rapidly. We can't pull up a book or website to research these teachings. Once this knowledge is gone, it's gone."

More information about Mesa Media and the workshop is available at mesamedia.org.