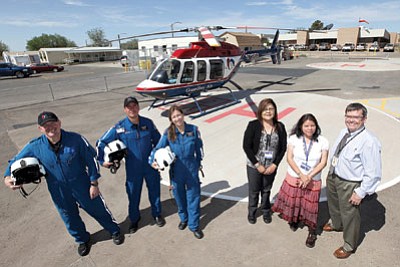 TUBA CITY, Ariz. - Response times to medical emergencies on the Navajo and Hopi Reservations have historically been slow because of the long distances from Flagstaff Medical Center or Tuba City's hospital to the scene of an accident.

But a recent partnership between Tuba City Regional Healthcare Corporation (TCRHCC), Guardian Air (GA) and Flagstaff Medical Center (FMC) to station a helicopter at TCRHCC is yielding faster response times and life-saving support for critical care on the reservation.

Guardian Air Director Wade Patten said that TCRHCC wanted to partner with somebody so the hospital could deliver a higher level of care to patients and be able to deliver that care in a timely manner. Until Guardian Air stationed the helicopter at TCRHCC, the hospital was unable in many cases to deliver care in the "golden hour."

"It has improved access to trauma care," TCRHCC Chief Executive Officer Joseph Engelken said. "The whole concept of the golden hour is if you can get to a patient and get them stabilized and onto the critical care that they need then the percent of survival as well as the reduction of damage is vastly improved."

She said before the helicopter, longer ambulances rides probably caused patients to have poorer outcomes. Now with the helicopter and the decreased time for transport, outcomes are improving and in the long run the hospital will probably see better use of contract health funds for specialty services such as cardiology, oncology or other things.

"Trauma takes up a lot of our money because if you think about the transport, the ICU days, the rehab phase, what does that do to our families for the month, two months, three months that they are not here as well as lost income, if it is a person who is not working?" Bonar asked. "Those are services where there is a positive, besides just having a better outcome, it helps our community as far as covering services that we can't offer."

Patten said Tuba City is a strategic location, allowing Guardian to provide shorter response times providing critical care to patients sooner. Tuba City used to be 45 to 50 minutes away from Flagstaff not including the return flight. Now the air time to some accidents can be as little as three minutes depending on location.

"With the helicopter at Tuba, we can get to Kayenta in 30 minutes, to Chinle in just a little bit longer than that, Page is about 20 minutes and Kaibeto is about 10 to 12. We cut the time in half," Shawn Henrie, a Guardian pilot, said.

Emergency room physician Stephen Melnychuk said the helicopter makes a difference in how fast they can get critical patients to a higher level of care.

"It's been a great help," he said. "We've had a lot of patients that we're just unable to care for or we just don't have the capacity to hold in the hospital. The ability for the flight crew to be here and be able to get the patients to a higher level of care where they actually need to be has been quite nice. It has cut down the time dramatically as far as how long we need to keep the patient here before they can get definitive care at another institution."

Along with improved response time, the level of care provided by the flight medical team is making a difference in the care that TCRHCC is able to give patients.

"(Guardian) is able to accurately triage the patients once they get on scene and they are able to assess what Tuba is able to handle and get the patient where they need to go," she said.

"Most of them have been doing this for 15 or 20 years," Patten said. "Even our rookies are very experienced."

"As far as medics go, this is the highest level of care that we can get in our career. We're held to the same standard and level of care as a nurse so I get a whole other aspect of medicine that I have to learn," Armand said.

But he likes the autonomy and the responsibility of his job.

"This is our little office. We work on our own, we don't have to ask doctors for orders. We have a plethora of medications and skills and we're held to a higher level of care and a higher standard," Armand said.

"It has become the busiest base in the company. There is so much area up here that the helicopters further south were having to cover and other companies further north were covering. I think it is definitely a needed service," Destfano said.

The ER staff and the pilot point out that having a trauma nurse on board is critical.

"A lot of the ambulance guys will get out there and realize this is way beyond my scope of care but not so with these guys," Henrie said, pointing to Destefano and Armand. "The speed of the helicopter is one thing but having the people with the capability to treat a higher level of injury, that is 50 percent of what we bring."

And it is those skills that are enhancing the partnership between TCRHCC, FMC and Guardian.

"The Guardian crews go above and beyond," Succo said. "I know that they educate our EMS staff and they have also offered to educate our nursing staff in critical care. They are really knowledgeable and they're willing to share that knowledge."

Bonar said that the partnership has not only improved communication for trauma but for other specialty services.

"They know we're good to work with, they are getting to know us better, as far as our staff," Bonar said. "And there is more trust happening with us toward them."

Engelken sees the partnership reaching into all areas of the hospitals.

"It's going very well - it's been a mutual benefit and a win-win," Engelken said. "All levels right on into both hospitals, that kind of networking is the most powerful kind of partnership, that will continue to just grow over time."