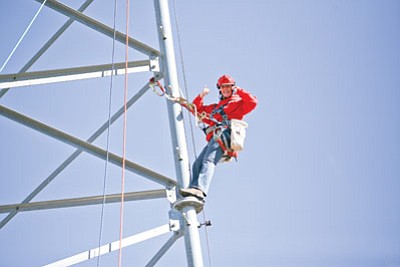 Cellular One CEO Louise Finnegan checks out one of the company’s towers ahead of their new network expansion project. Submitted photo

SHOW LOW, Ariz. - Cellular One plans to upgrade its entire network to 3G and 4G data speeds beginning this summer. The move will provide better coverage, quality and reliability throughout its coverage area which primarily comprises the rural and tribal communities of the Four Corners region.

The local cellular carrier will also launch a number of new cell sites before the end of the year - representing a 50 percent increase in the number of sites it operates in the region.

Ericsson, a world-leading provider of telecommunications equipment and services to mobile and fixed network operators, will help with the transition.

"This year we are inarguably taking our network to the next level.  The move to 3G and 4G technology has long been a top priority for Cellular One," saidCellular One CEO Louise Finnegan.  "Despite the challenges of coordinating an upgrade and expansion of this scale across such a vast geographic footprint, we are confident that throughout 2013, even customers located in the most remote areas we serve will truly be able to Live Connected with high quality, reliable and affordable coverage."

Cellular One Chief Technical Officer Guy Turley said Ericsson was the clear choice for Cellular One.

"They boast a worldwide market presence, and a solid reputation in providing the best service and security," he said. "This is an important priority for Cellular One and its customers, together with their ability to work with us to efficiently provide a high quality product.  We look forward to a long and productive partnership with Ericsson as we take Cellular One to 3G and 4G."

According to Cellular One, before the company's investment in expanding its network throughout tribal lands, telephone penetration for most communities in these regions was roughly 27%.  In cooperation with the FCC, the U.S. government and the Navajo, Hopi, Zuni, and White Mountain Apache Native American Tribal Councils, Cellular One currently provides basic cellular telephone service to approximately 80 percent of these rural tribal areas.