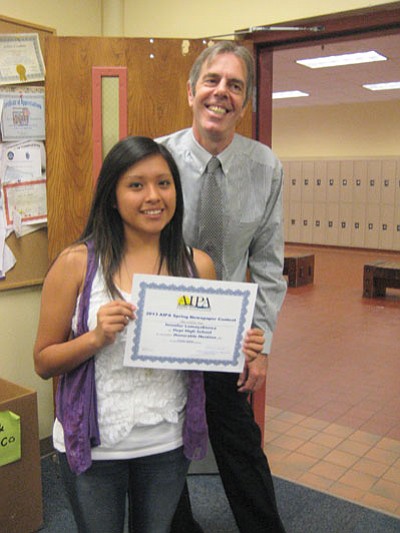 Unlike sports, there are no divisions so all schools compete against each other. Hopi High faced competition from the best schools in the Phoenix and Tucson areas.

Hopi High's radio students produce the Hopi High Teen Show, the only live remote Native American teen talk show in the nation. The radio show is on 88.1 FM with streaming online at KUYI.net.

Puhuhefvaya's two other awards were honorable mentions for her news story "Bullying needs to be addressed" and her sports story "Runners learn from Wings of America."

"I felt proud of myself for winning these awards," Puhuhefvaya said. "It shows that all my hard work paid off."

Puhuhefvaya plans to join the National Guard but hopes to get involved in radio down the line "just for fun." She is considering minoring in radio in the future.

Christine Rucker, a senior, earned two awards. Rucker received an excellent for her sports story "Girls can wrestle too." She received an honorable mention for her public service announcement "Educational Talent Search."

Shacely Miguel, a junior, earned two honorable mentions, one for her personality profile "Howard enjoys basketball" and a second for her commercial about an upcoming concert.

Janaya Leslie, a senior, earned an honorable mention for her feature "Medical marijuana can be helpful."

"We did well this year. It's good for the kids, the program and the school," he said. "I am especially proud of the advanced radio class because every student in the class won a state award. That's never happened before and it's pretty amazing."

Vance Quamahongnewa, a junior, earned two honorable mentions, one for his news story, "Lynch helped asthma student." The second was for his commentary "Communities can use more respect."

Bindell said he thanks the Hopi Jr./Sr. High School Governing Board, Superintendent Paul Reynolds and Principal Glenn Gilman for financial support and other support for the media programs. He also thanked KUYI Station Manager Richard Davis, KUYI staff and the Hopi Foundation that has made the Hopi High Teen Show and these contest awards possible.