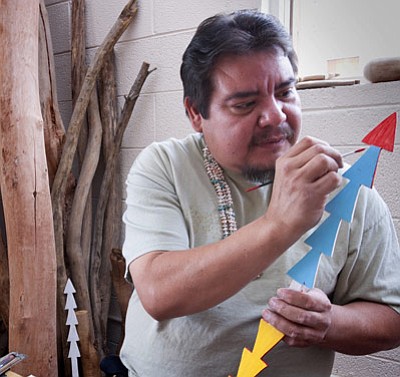 WINSLOW, Ariz. - When many people think of Kachina dolls, they probably don't look like the kind that Larry Melendez carves. Melendez is an old-style Hopi Kachina doll carver from Sichmovi on Second Mesa.

"That's a new term for the Kachina dolls that I do," Melendez said. "The style I do is the old-style from the late 1800s and early 1900s. The style didn't change until the railroad came through the southwest."

Melendez said into the mid-80s, carvers only made contemporary dolls.

Melendez explained that new style sculptures allow the artist to use their imagination to create life-like dolls with small details, even including carved fingernails.

"I was a protégé to my older brother. He was like the Henry Ford of the Kachina doll carver of the old style, he was the source. He was the one who did a lot of research into the Kachina dolls and from there we revived it," Melendez said. "First was form and then after form came heat and that took about two years to develop and then after that the application of deer skin and horse hair and feathers and it took a lot of reeducating throughout the whole southwest to introduce the style."

The old style dolls don't come with a base and are usually suspended on the beams of Hopi houses. The dolls are also teaching tools.

"Whenever elders tried to teach a lesson about how to successfully live in the environment we live in it was done with these dolls," Melendez said.

Melendez said that it is up to the discretion of the artist as to what materials are used. He uses a lot of organic material but some materials are newer than others. With paint, some are natural pigments and others are acrylic.

Melendez said the time it takes to make each Kachina doll depends on a variety of factors.

"It depends on what the doll is and the materials applied compared to what materials you have available compared to the size of it," Melendez said. "Sometimes I have to deny orders, because I have no deerskin or I have no horsehair or I have no parrot feathers and I have to say, I can't do that."

Melendez hunts for wood in specific shapes to make his dolls.

"I have had dolls take up to six months to complete because I am waiting on material to apply to that Kachina," he said. "Sometimes I try to take advantage of the material even if I don't need it right then but I know I will need it in the future," Melendez said. "What you can do is dictated by what you have at hand."

Melendez said the art has come a long way in 25 years.

"It's good to see that a lot of people are following our suit because they are able to support their families on it," Melendez said. "Being an artist and not making too much money it gives us the necessities to do what we have to do."

Melendez said he does his best to give what information he can to people when they are buying his Kachina dolls.

"When you sell Kachina dolls on a commercial platform, collectors and buyers want to know that intimate information, what they do and what role they play. I am limited to 35 Kachina dolls because those are the ones that I know all the details to carve it."

Melendez believes that his art is a way of giving back to his community and hopes that he can leave something for younger generations to learn from and build upon.

"That is what I would like to instill in the carvers under me," Melendez says. "I have a lot of young artists who come over just to learn. They come in and they are just curious and they want to learn and that is good. They learn it and retain it and with some luck they will pass it on. I would hate to have my grandkids have to go into a museum to learn how we were."