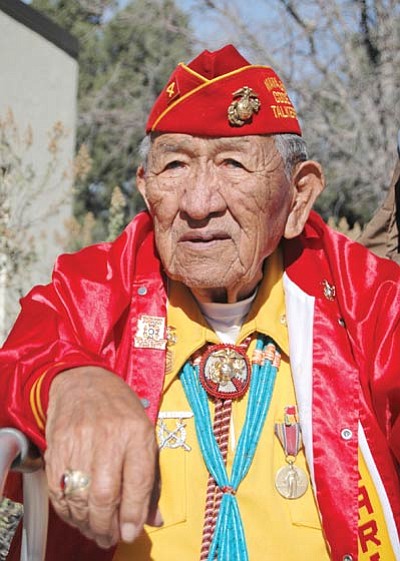 Akee, of the Kiyanni and Ashihii clans, was born in Coalmine Canyon in November 1922. He grew up in the Coalmine Mesa area. He started school in 1928 at an early age at the Tuba City Boarding School. Akee withdrew from school shortly after he started for medical reasons and went to a convalescence home in Kayenta, Ariz. to recover from tuberculosis. There he taught himself and reached a 10th grade level equivalent.

Akee enlisted in the United States Marine Corps in 1943, shortly after the outbreak of WWII. Akee trained as a code talker and was detailed to the 4th Marine Division, 25th Regiment. From 1943-45, Akee took part in some of the most ferocious fighting in the Pacific theater. He participated in the Marshall Islands, Saipan, Tinian and Iwo Jima campaigns.

As a code talker, Akee transmitted and received messages in coded Navajo, a code that was never broken.

A scene in "Windtalker," a movie about Navajo code talkers during the war, depicts a Navajo marine sending a message in coded Navajo during the Battle for Saipan. The Navajo directs an offshore ship to fire on an enemy position that was threatening an American position. That imaginary man in the movie could have been Akee because this was the very thing that Akee did during that battle.

After the war, Akee retired to civilian life with a rank of Sergeant Major, the highest rank for a non-commissioned Marine officer. He went back to high school at the Sherman Institute in Calif. but did not get a high school diploma, because of post war stress trauma. According to Akee, he recovered from the trauma with the help of Navajo Way and Christianity. He worked on the railroad and in a uranium ore processing plant. In 1967, he became an interpreter with Tuba City Hospital's mental health department where he retired in 1988 after 21 years of service.

School officials said the honorary high school diploma is long overdue and recognizes Akee's achievement as a code talker and his outstanding and tireless lifetime of service to the Navajo people and the United States.