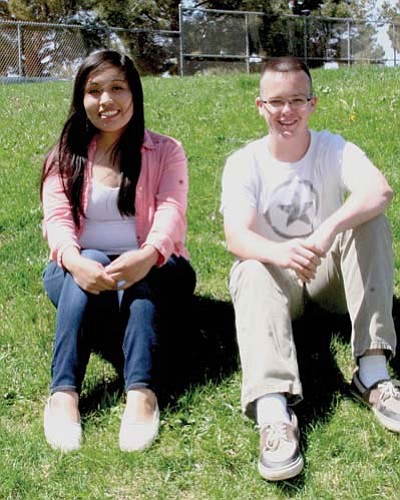 TUBA CITY, Ariz. - Tuba City Unified School District provides an educational environment that allows students to compete and thrive academically while learning about other ethnic and non-Native backgrounds. Students foster cross-cultural relationships while attending classes and events with students who are from other parts of the world.

This year is no different. Ryan Moran is this year's valedictorian. He is of Irish, Italian and Croatian descent. This year's salutatorian is Stephanie Antonia Geneeha, a full blooded Navajo tribal member.

Moran is the son of Kathleen O'Connor-Moran and Ken Moran and finished the year with a 4.4 grade point average (GPA).

Geneeha is the daughter of Rosemary and Garry Geneeha, from the Tse'deeshgizhnii (Rock Gap clan). She finished the year with a 4.2 GPA.

Moran received a full scholarship through the University of Arizona's "Wildcat Excellence" award and will attend U of A in the fall majoring in biology.

Moran has always had a serious competitive side excelling in chess and having special interests in both science fiction and fantasy. Living on the Rez in Tuba City allowed Moran to develop close relationships with both Hopi and Navajo students. He said the relationships gave him insight into Native traditions and customs, which enriched his life and outlook and has helped him appreciate ethnic culture.

Geneeha will also study biology and will attend Arizona State University in the fall.

One was the "constant, encouraging words and support from my maternal side of the family and two amazing teachers, Effie Hyden and Tom Jones of Tuba City High School."

"Ms. Hyden and Mr. Jones constantly challenged me to pursue my dreams, though there were lots of statistical odds against me in succeeding. Ms. Hyden helped me find my love for science and Mr. Jones helped me realize that English can be fun... though I really didn't think so at first," she said.

Geneeha said she would eventually like to become a dentist and hopes to one day visit Africa, which is on her "bucket list" of travel accomplishments.