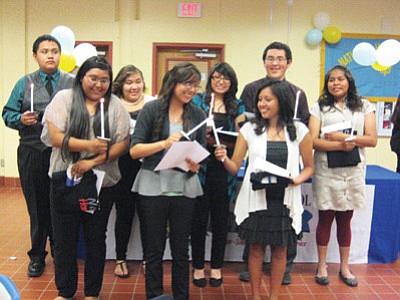 Advisor LaVonne Adams talked about the many service projects that NHS put on during the past school year including a food drive for the elderly, service programs for veterans and special needs students and spotting at races.

"They kept working when they were tired and had homework to do," she said.

Adams said there were smiles and tears of joy in the community when the NHS students helped the elderly, veterans and students.

Lomayaktewa, a junior, said she thought it was amazing that she found her way into NHS.

"I felt so accomplished when I heard my name come on the intercom for the new inductees," she said. "During the induction, I felt honored and knew I was becoming a member of one of the highest education levels."

Lomayaktewa, who is also a journalism student, said serving as a member of NHS means she can help her community and school while working on her education.

She said her mother and grandparents are proud of her accomplishments.

"I know I earned my spot in NHS," she said. "NHS is important to me because it recognizes students who have outstanding characteristics. It also provides students with opportunities for learning and scholarships."

Speen, a sophomore, said it feels exciting and honorable to become part of the prestigious honor society. She said her parents are proud of her and getting accepted into NHS has raised their expectations of her.

Speen, who is also in broadcast radio, said NHS would help her when she goes to college.