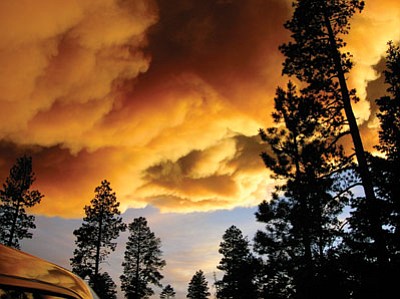 FREDONIA, Ariz. - Crews working with the North Kaibab Ranger District of the Kaibab National Forest recently replanted around 470 acres within the 2006 Warm Fire area on the Kaibab Plateau.

The Warm Fire burned close to 60,000 acres southeast of Jacob Lake, Ariz., with nearly 40,000 acres that burned at moderate to high intensities.

Since that fire, the Kaibab National Forest has been working to replant burned areas that maintain productive soil, yet lack a plentiful seed source.

"There is a small window of opportunity for replanting each year between the time winter snow melts and before conditions become too hot and dry for seedlings to survive," North Kaibab Ranger District Silviculturist Garry Domis said.

This year, crews received about seven inches of snow halfway through the two-week replanting effort, but still managed to plant more than 105,000 ponderosa pine seedlings.

Much of this year's planting effort focused around scenic corridors along Highway 67 leading to the North Rim of Grand Canyon National Park, and along the Arizona Trail segment that passes through the fire area.

To date, the district has replanted more than a million ponderosa pine and Douglas fir seedlings on about 3,300 acres of the Warm Fire area and certified natural regeneration on about 570 acres.

More information on this reforestation effort is available by contacting Domis at (928) 643-8140.