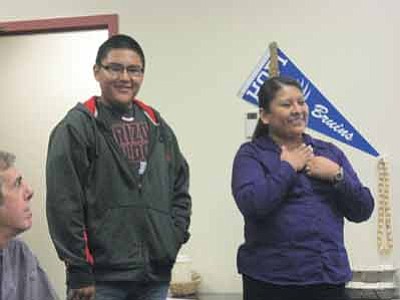 Detroit James and Lucille Sidney talk about the Close Up program at the March 19 Hopi Jr./Sr. High Governing Board meeting. Photo/Stan Bindell

Hopi High School academic counselors Dushon Monongye and Laurel Poleyestewa spoke about careers for students and the services the counselors offer. The duo gave a presentation about their department during the March 19 governing board meeting at Hopi Jr./Sr. High School.

Poleyestewa, academic counselor for freshmen and sophomores, told the board about the wide range of services the counselors provide from setting student class schedules, to working with parents, to giving state tests, working with Upward Bound and giving classroom presentations.

"Teachers can request presentations on everything from bullying to study skills," she said.

Monongye, academic counselor for juniors and seniors, said their program is now offering a state mandated career pathways course. Since Hopi High School is a federal school, administrators do not have to offer state programs, but they felt that this program will be helpful.

Monongye said she was in the first graduating class at Hopi High School.

"We didn't have as many programs back then," she said. "But I made it. It's up to the students and parents. It's about work ethic."

"I tell kids it's not going to come to you. You have to work for it," she said.

Poleyestewa said if any parents or community members have any questions that they can ask either Monongye or her.

"Rarely do parents ask what services we have to offer," she said.

Troy Lomavaya, vice president of the governing board, asked whether the services were only for motivated students.

Poleyestewa said counselors go into the classrooms to meet with all of the students. They also have parent orientations and send out letters to the parents.

"Opportunities are available to all students," she said.

In other school board news, Detroit James, president of the Close Up club, said he had a great experience at President Barack Obama's inauguration in Washington D.C. in January.

James, a sophomore, was one of ten students from Hopi High to attend the inaugural as Close Up members. Close Up is a federal non-profit that brings students from throughout the nation to Washington D.C. each week to study the federal government.

The Hopi High students were lucky to get the draw during inauguration week.

James said the inauguration was historical because it was the second term for the first African American president.

"It made me want to go back," he said. "It shows me that anybody can do it. I want to be in the office one day. It shows that there are no limits how far you can go and how our nation is run."

James recounted how the Hopi students attended an inaugural ball with more than 1,000 students. He was also impressed with Martin Luther King's Memorial because of King's leadership.

He noted that there was high security in the nation's capital. He also liked the wax museum because the wax people looked real.

Lucille Sidney, advisor for the Hopi High Close Up club, said the students discussed and debated important issues when they participated in a mock congress.

Hopi High Principal Glenn Gilman credited Gifted and Talented, special education department and the business department with helping to pay for the trip to Washington D.C.