Report: as economy bounced back, so did Indian casino revenues
Arizona's 22 casinos brought in $1.76 billion in 2011, up 7.3 percent from a year earlier 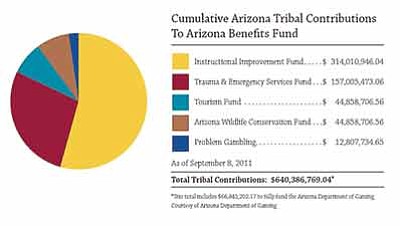 Revenue from tribal gaming in Arizona grew at more than twice the national rate in 2011, rising for a second year as the economy inched out of recession, a new report says.

Arizona moved from 20th place among states for tribal casino revenues to sixth place during that time.

"Slowly but surely the economy is coming back around," said Valerie Spicer, executive director for the Arizona Indian Gaming Association. "When the gaming numbers come back up, the contributions to the Arizona Benefits Fund go up, and that affects everybody in the state."

The report also showed an increase in non-gaming revenues, which rose 7.5 percent in 2011, as casinos have tried to diversify in the face of regulation, maturing gaming markets, increased competition and Internet gaming.

Arizona tribes have turned their attention to expanding operations and improving the non-gaming elements in their casinos, the report said. Spicer pointed to a new Gila River Indian Community outlet mall and the report noted the addition of hotel and conference facilities to casinos.

Economist Alan Meister, the author of the report, called the industry's performance especially encouraging because the U.S. economy is still coming out of the recession.

"It's taken some time," he said of the casinos' comeback, but he predicted further growth as the economy improves, casinos are upgraded, competition remains scarce, the industry evolves and restrictions are eased.

Spicer said it is important to remember that the tribal gaming market is unique because of "deficits that existed for hundreds of years before."

"We're starting from a deficit and building up," she said, and there is still room for growth. But "we have to be mindful that there may be a point where that levels off."

Meister said there are clouds on the horizon. As one example, he cited the gaming compacts with states that can limit the amount of money a tribe can make.

"The tribes in some places have hit some barriers where they couldn't grow any more in terms of meeting demands," Meister said, meaning that crowded casinos with long lines for the slot machines were stuck.

He said several large tribes were able to gain some wiggle room by amending their compacts before the recession.

Spicer said Arizona's 2002 compact gave tribes an economic opportunity that they had been deprived of for a long time, while giving the state a new source of revenue.

"It's given a framework and structure to spread out the benefits of gaming throughout the state," she said.

Meister said tribal gaming has become a key piece of the economy for both Native Americans and Americans.

"In total, Indian gaming is contributing to the U.S. economy. When you look at taxes, a lot of tribes make payments directly to federal governments," he said.

The Arizona Department of Gaming recently reported that tribal casinos' contributions to state coffers had increased for the last 10 quarters.

Jelena Momich, a project specialist with the department, said that is good news for Arizona's education, wildlife conservation fund and trauma and emergency services. The money is also used to support state tourism efforts.

"With the improving economy and consumer confidence on the rise, I'm hopeful we can maintain this trend and the state's important programs will continue to benefit from these funds," Momich said.

But there are drawbacks that come with the benefits, said Keith Whyte, executive director of the National Council on Problem Gambling.

Whyte said that as gambling revenue rises, the programs that most need funding are those to help gambling addicts.

A portion of Arizona casino revenues are used for the state's Office of Problem Gambling. Whyte said Arizona is "one of the rare states" where the effort is left solely to a state office, without help from tribes or other organizations.

"I don't know if that is healthy in the long-term. I think there is probably a lack of a range of services available," he said.

As casinos continue to grow, it is important that they operate responsibly and legally, Whyte said. "Gambling revenue is not painless," he said.

Spicer said all of Arizona's tribal casinos are very careful.

"Everybody wants gaming to be a healthy, entertainment-driven scenario," she said. "As revenue goes up, contribution goes up."

"Tribal governments are able to provide services in their communities far better than they would have been able to when the numbers were down," she said.

Meister agreed that continued growth would be good for tribes.

"I think the whole purpose of Indian gaming is to enable tribes to support themselves and their tribal members," he said.