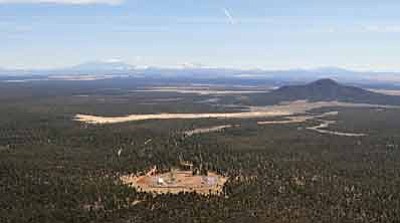 The dormant Canyon Mine in the Kaibab National Forest south of the Grand Canyon. Photo/Tara Alatorre

Conservation groups celebrated a federal judge's ruling that denied a motion to overturn the Obama administration's ban on uranium mining on 1 million acres of public land near the Grand Canyon.

"If it had been instituted, it really would've crippled the ability of the Interior Department to say, 'Hold on, we need to take some time to set these lands aside because there's other lands out there we want to protect,'" said Ted Zukoski, an attorney with the environmental law firm Earthjustice.

The 20-year moratorium was adopted in January 2012 to protect the canyon's watersheds by prohibiting new mining claims and any development on old claims that lacked "valid existing rights."

A handful of conservation groups countersued, including the Grand Canyon Trust, a nonprofit that aims to protect and conserve the Colorado Plateau.

"The whole idea of the 20-year ban is a precautionary and prudent decision by the federal government, because once you contaminate groundwater there's no reversing it," said Roger Clark, director of air and energy for Grand Canyon Trust.

Taylor McKinnon, wildlands campaigns director for the Center for Biological Diversity, said that if government and industry cannot prove that uranium mining is safe, it shouldn't happen at all.

The plaintiffs are pursuing other avenues to block the withdrawal, including a challenge to the Interior Department's environmental analysis.

"We're obviously disappointed in the decision, but in the same token, not all the issues that were before the court were addressed in this decision," said Luke Popovich, vice president of external communications for the National Mining Association.

Clark, with the Grand Canyon Trust, said he hopes the ban on uranium mining will eventually be permanent.

"We're confident that the 20-year ban will not only provide time to not allow claims to move forward, but give time to better document the impacts of the existing mines," he said.