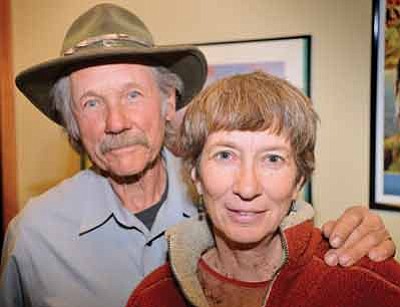 At the monthly Homolovi Archaeology Society meeting in the Hubbell building on March 21, Sky and Dennis Roshay, who live in the White Mountain area, treated members to a presentation of four videos detailing rock art in the area.

The longest video showed many rock-art panels in the Chevlon Canyon south of Winslow. Two of the most spectacular panels are named "The Big Panel" and "Slim Jim."

The Roshays said there is evidence of the panels being created over time with successive groups of Native Americans adding to the art, beginning in the Basket Maker Period. The panels feature elk figures and heads with large eyes. Many of the other images are geometric designs. The Roshays visited two other sites near Laughlin, Nev. and close to Winslow. The last site the pair visited was in California near the Colorado River.

The two most interesting images here were crosses similar to Christian or Aztec symbols. Some designs looked like space ships with windows and landing legs.