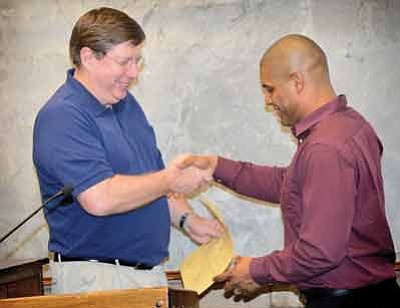 The council appointed John Henley and Robin Henley to the Planning and Zoning Commission.

A city crew pulled the city dredge from Clear Creek after the dredge sank. Preliminary inspection reveals damage at the dredge's water line from two bullet holes. Police suspect a hi-powered rifle caused the damage. Winslow Police are investigating and a reward for information leading to an arrest is being considered. The city dredge is insured and will be back in service after repairs are complete.

Finally, council members discussed the length of funeral services at the city cemetery, which often extend for hours, complicating cemetery scheduling. The council agreed that better communication about scheduling constraints will likely solve the problem.