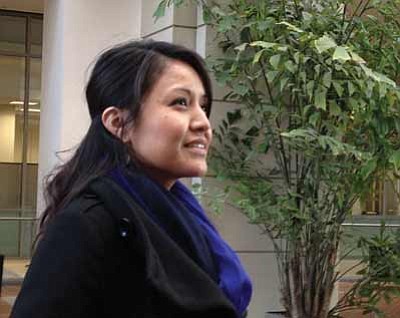 Amanda Blackhorse, a Navajo woman from Arizona, argued that the name Washington Redskins is racist and hurtful and that the government should strip the team of its trademark to the name. Photo/Michelle Peirano

A Navajo woman was in Virginia last week to argue that the Washington Redskins should not be allowed to trademark what she and other Native Americans see as a racial slur.

"I think enough people have spoken out," said Kayenta resident Amanda Blackhorse, of the number of people who have called the team name offensive. "One is too many."

Blackhorse was one of several Indians telling the U.S. Patent and Trademark Office that Pro-Football Inc., the team's parent company, should not be able to trademark the "Redskins." In a petition first filed in 2006, the group of six plaintiffs said the team's trademark should be canceled because it is used offensively, a violation of federal law.

But team officials argued that there is not enough evidence to show that the team's use of the name is offensive to Native Americans.

Pro-Football Inc.'s lawyer Robert Raskopf said surveys asking Native Americans if they thought the name was offensive did not find significant results, and were filed too late.

He also argued that several dictionary definitions say "redskin" simply means North American Indian, and that only a few dictionaries suggest it should not be used.

Redskins' General Manager Bruce Allen said the team's name is more often associated with the good deeds the team has done in the community since its inception.

"I'm extremely proud to be a member of the Redskins," Allen said. "What we do in the community ... helping kids ... between the team and the foundation, over 100,000 kids have benefited."

He said the name and logo are a significant part of the team's history. The Redskins have had fans "for more than 80 years, and that's who the team represents," Allen said.

But Blackhorse said that attitude ignores the damage the word does to Native Americans who still suffer from negative stereotypes.

"It's gone on so long we are desensitized from it," she said.

She said she would like to see the name and logo banned entirely, but that the team would still be able to use the name even if it lost the trademark. But it would no longer be the sole producer, Blackhorse said.

This trademark fight is just the latest attempt to get team owners to change the name.

In 1992, another group of Native Americans petitioned the patent office on the same grounds and won. But the team appealed that ruling to U.S. District Court, which found in 2005 that there was not enough evidence against using the name.

Suzan Shown Harjo, a plaintiff in the 1992 case who was at Thursday's hearing, said the underlying question in both cases is whether team owners are arrogant or ignorant.

"I don't think they're ignorant," Harjo said. "They are ignoring that we are up against so many pressures in Indian Country."

The name brings up a painful history for Native Americans and keeps that history alive by characterizing them by skin color, which carries a deeper societal implication, Harjo said.

Blackhorse said she decided to get involved after attending a protest at a Redskins game when she was in college. Her petition was filed in 2006, and it could take another year to get a decision, lawyers said.

"The way our culture was mocked and the things people said to us," Blackhorse said. "I got to see how offensive the games actually are.

"It's hard to tell sometimes, but I have met a fair share of people who have been offended by it," she said. "And like I said before, one is too many."